Great Divide’s first phase of their new brewery complex on Brighton Boulevard is complete. For an overview of the two-phase project, check out our first post on this cool industrial mixed-use project.

Last weekend when I was out taking DenverInfill photos, I swung by the Great Divide site at 35th Street and Brighton Boulevard and snapped this pic: 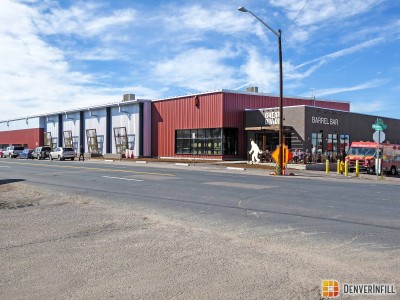 Then, as I was uploading the photo, I noticed the rendering of the project from our first post:

Wow! What a coincidentally almost-perfect “before and after” shot. I’d say the architects did a good job of producing a realistic rendering of the what the building would ultimately look like.

Here’s another view, looking down 35th Street towards the South Platte River: 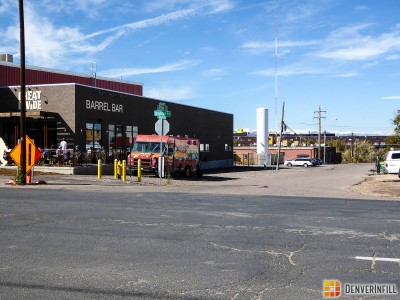 Something to keep in mind when looking at these images: the barely existing, crumbling right-of-way infrastructure is about to get a major redo. Brighton Boulevard will be completely rebuilt starting in 2016 with new street pavement, curb and gutter, sidewalks, cycle tracks in both directions, lighting, signage, under-grounded utilities, landscaping, and public art. Also, 35th Street will be transformed in the future into a pedestrian-priority street to connect the new 35th/36th Street Pedestrian bridge over the railroad tracks at Blake Street with the proposed River North Park at 35th and Arkins Court and the proposed RiNo Pedestrian Bridge over the South Platte River. Here’s a preliminary concept rendering from the City of what the intersection of 35th and Brighton could look like: 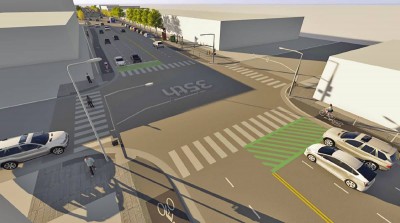 Exciting stuff! We’ll have a DenverUrbanism post in the future about these planned infrastructure projects in this area.

Meanwhile, Phase 2 of the Great Divide project should begin in 2016.