Construction on a new ultra-green condominium and townhome development, S*Park, is underway on the edge of RiNo in Denver’s historic Curtis Park neighborhood.

Located on the full city block bounded by 25th, Lawrence, 26th, and Arapahoe streets, S*Park will provide eight townhomes and 91 condominiums comprised of a mix of studio, 1-bedroom, 2-bedroom, 3-bedroom, and 4-bedroom units. S*Park is being developed by Treehouse Brokerage and Development in partnership with Tres Birds Workshop. 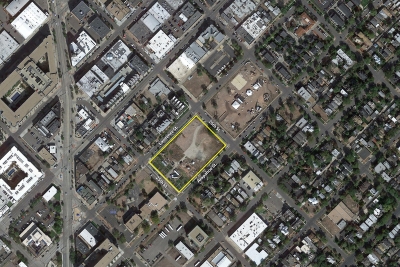 The green nature of this project is evident in several ways. Rooftop solar panels will generate electricity for the development while the exterior facade will incorporate reclaimed brick from former Denver buildings. A landscaped park in the center of the block will provide outdoor space for residents, and a greenhouse/restaurant and urban garden will anchor the site along 25th Street. Ground-floor commercial spaces at 26th and Lawrence will help connect S*Park to the walkable shops and restaurants on Larimer Street one block away, while the project’s three-story building heights, setbacks from the street, and front lawns mirror the lower-scale residential character of the neighboring blocks. Here’s a bird’s-eye view rendering of the project, courtesy of Treehouse and Tres Birds Workshop. Lawrence Street is on the left, Arapahoe on the right, and 26th Street at the top: 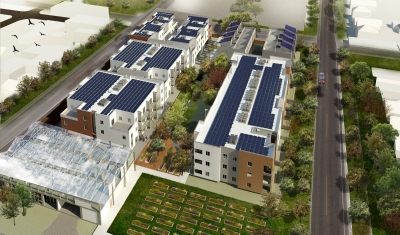 This block, along with the adjacent block to the northeast, once contained public housing owned by the Denver Housing Authority (DHA) that was demolished in the 2000s. As an interim use for the site, DHA partnered with the Colorado Renewable Energy Society to develop Sustainability Park, a three-year pilot project that featured a variety of “earth-friendly technologies and strategies for renewable energy, efficient resource use, sustainable design, urban agriculture and transportation.” Sustainability Park was the inspiration for the S*Park name and the development’s strong emphasis on sustainability and urban agriculture. The project’s next phase on the vacant block between 26th and 27th, as well as the undeveloped parcel at 27th and Arapahoe, hasn’t been designed yet but will be similar in scale to the current phase and will also feature a mix of condominiums and townhomes including a number of affordable income-restricted units under the city’s Inclusionary Housing Ordinance.

Let’s take a tour of S*Park using the above image, starting in the upper right (26th and Arapahoe) and moving clockwise. At that corner are eight three-story townhomes featuring rooftop decks and tuck-under garages, followed by a three-story condominium building and then the urban garden at the corner of 25th and Arapahoe. On the Lawrence Street side is the greenhouse/restaurant and two more three-story condominium buildings in the middle of the block. Finally, at 26th and Lawrence, the building will include ground-floor commercial units with two-story condominiums above. For the site plan and unit floor plans and pricing, visit this page at the S*Park website. Here are a few more renderings, courtesy of Treehouse/Tres Birds:

Two-story condos above ground-floor commercial spaces at 26th and Lawrence: 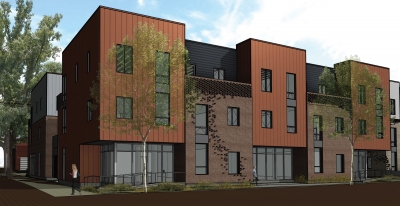 Exterior of condominiums along Lawrence: 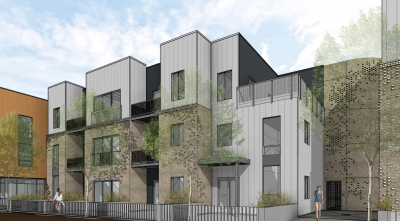 Exterior of condominiums and townhomes along Arapahoe: 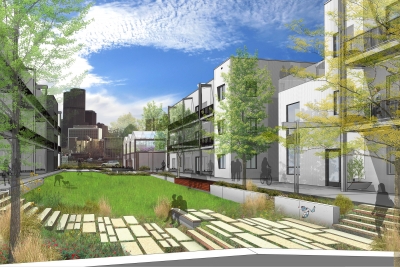 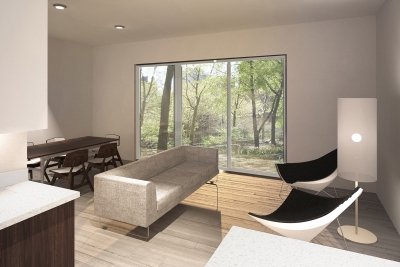 Parking for the condominium units, greenhouse/restaurant, and commercial spaces are provided underground along the Lawrence Street side of the block. I recently had the opportunity to tour the site, thanks to Clem Rinehart, owner of Treehouse Development.

Here’s a big panorama showing the excavation for the underground parking on the half block facing Lawrence:

The Arapahoe side of the block: 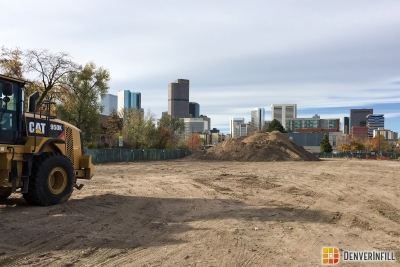 Mid-block along 26th Street is a large beautiful tree that will be preserved: 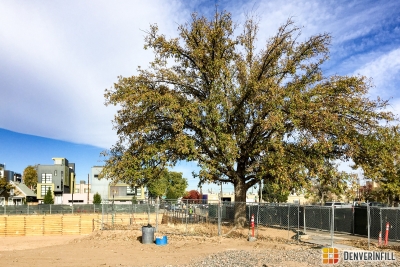 We will stop by S*Park in a few months with another update as construction continues.