Today we have a big update on another big project in the Union Station district: The Grand. Haven’t heard of it? That’s the new name for what’s been known until recently as 1709 Chestnut. There are banners on the fences surrounding the site promoting the new name, and they have a website now too.

By any name, the development is a substantial one, consisting of two towers—one 12 stories and the other 24 stories—providing a total of 508 new homes for people seeking to live a transit-oriented lifestyle, given the project’s location adjacent to the Union Station transit hub. About 8,000 square feet of ground-floor retail, 446 automobile parking spaces, 100 bike parking stalls, several indoor and outdoor resident gathering spaces, a pool, fitness studio, dog run, and a community kitchen round out the amenities. This is our tenth update on The Grand; you can check out all of our other posts here.

Architecturally, the towers strike a contrast, with the 12-story South Tower sporting a brick facade while the 24-story North Tower is mostly glass. Together, they make quite a visual impact. The project was designed by Shears Adkins Rockmore, with Shorenstein as the developer and Saunders as the builder.

Let’s take a look, starting with the South Tower, and views from along Chestnut at 17th: 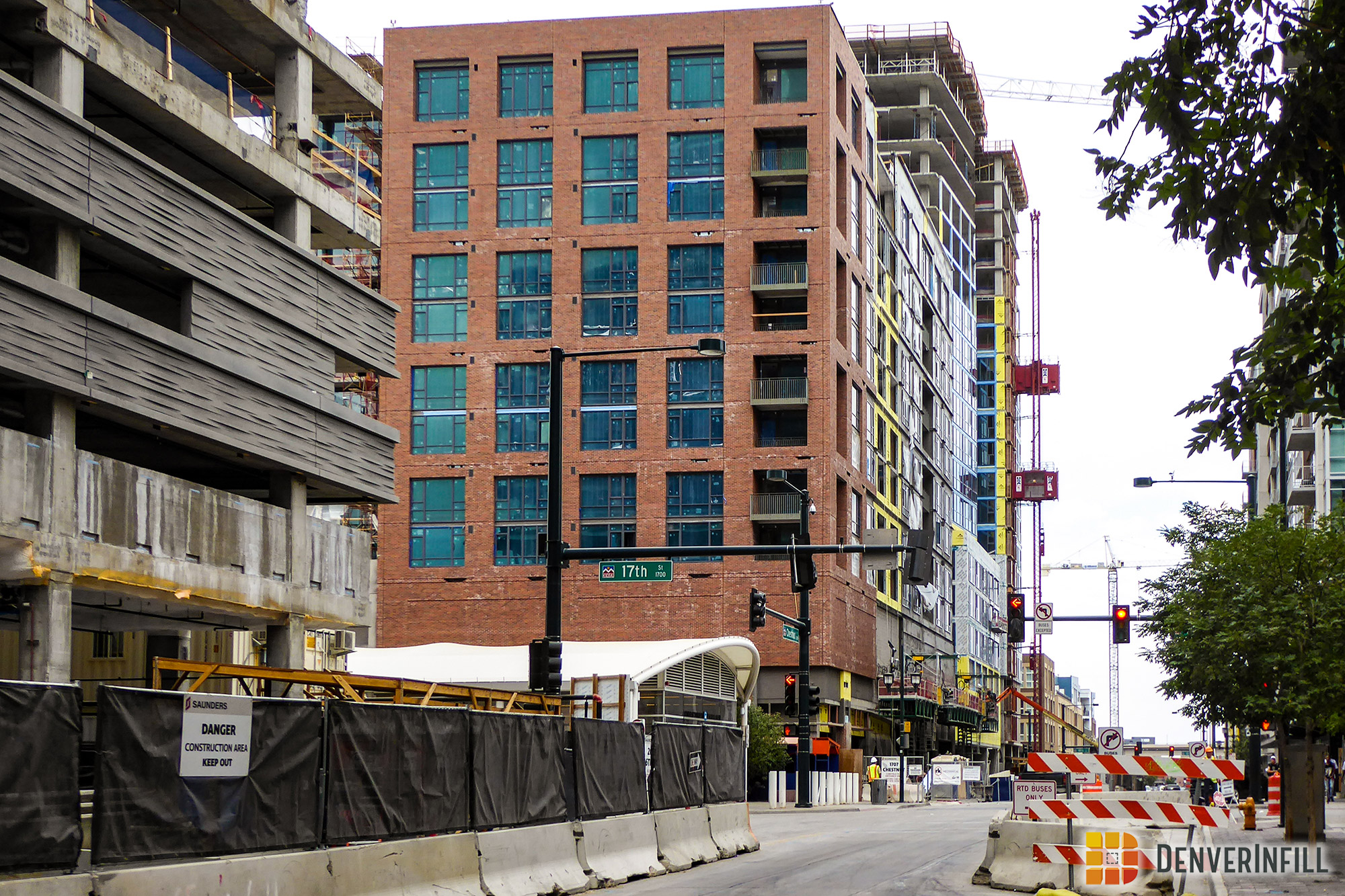 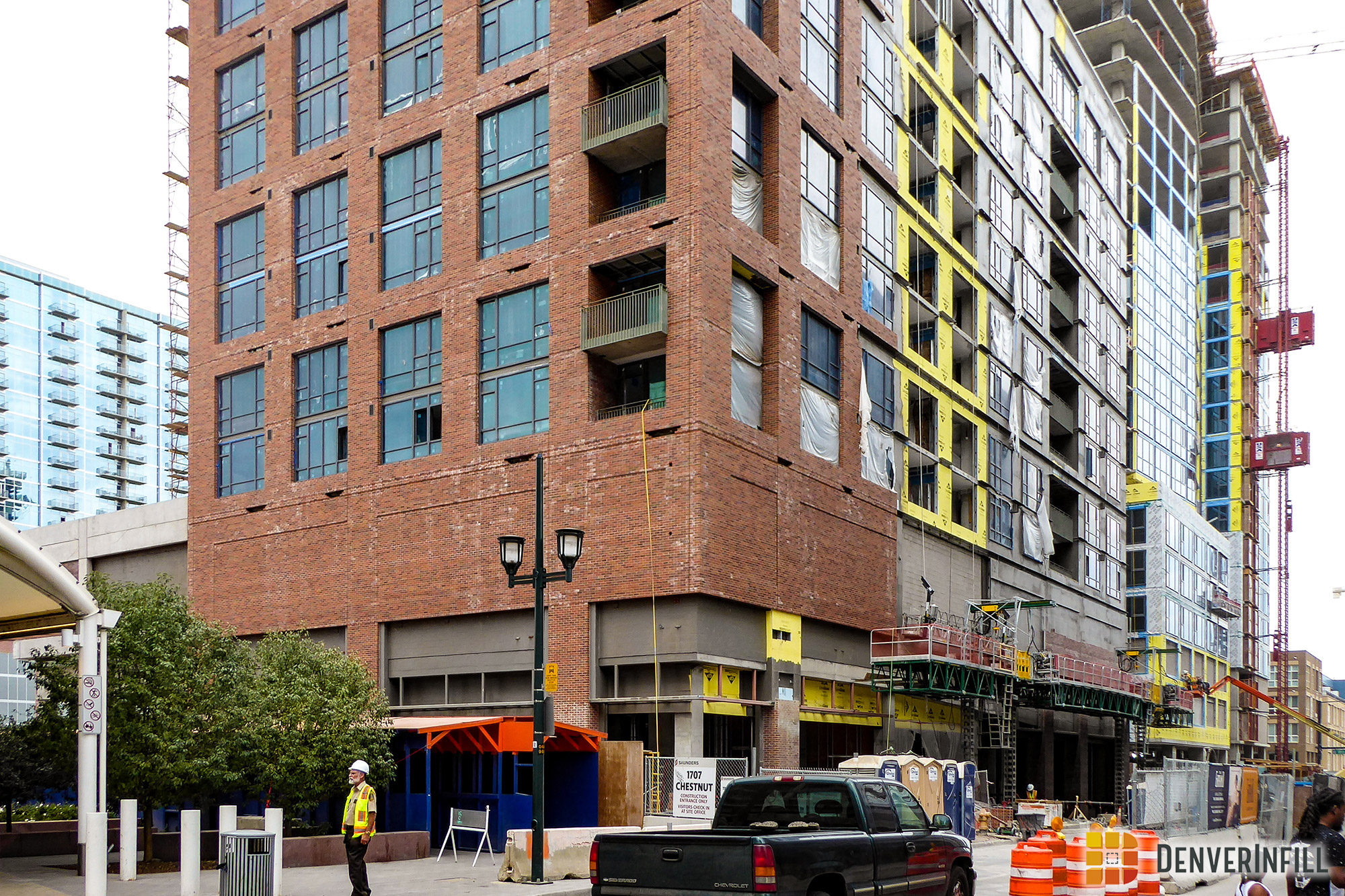 Here we see the gap between the South and North towers where access for motor vehicles and pedestrians lead to internal parking ramps and outdoor courtyards. 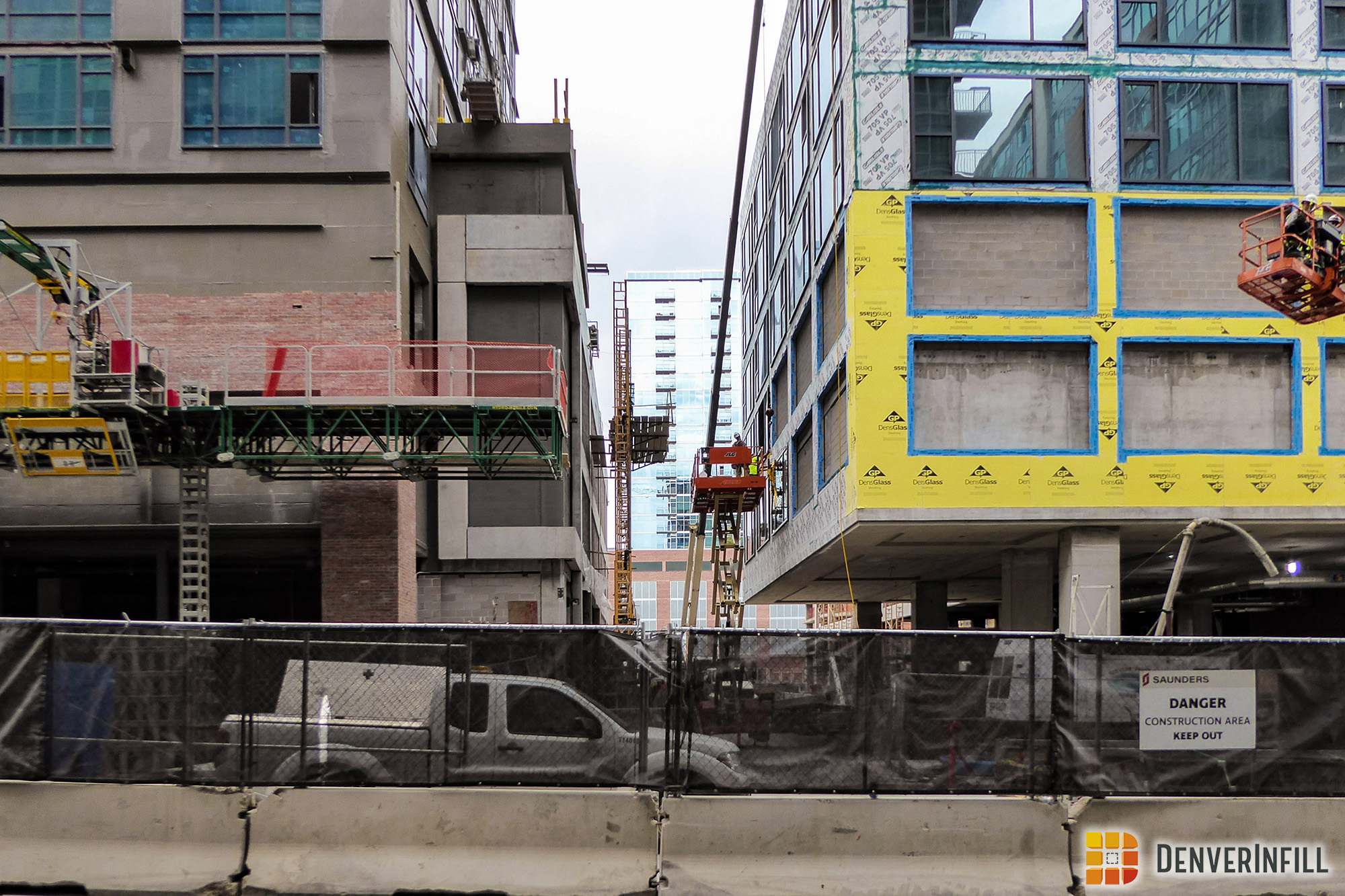 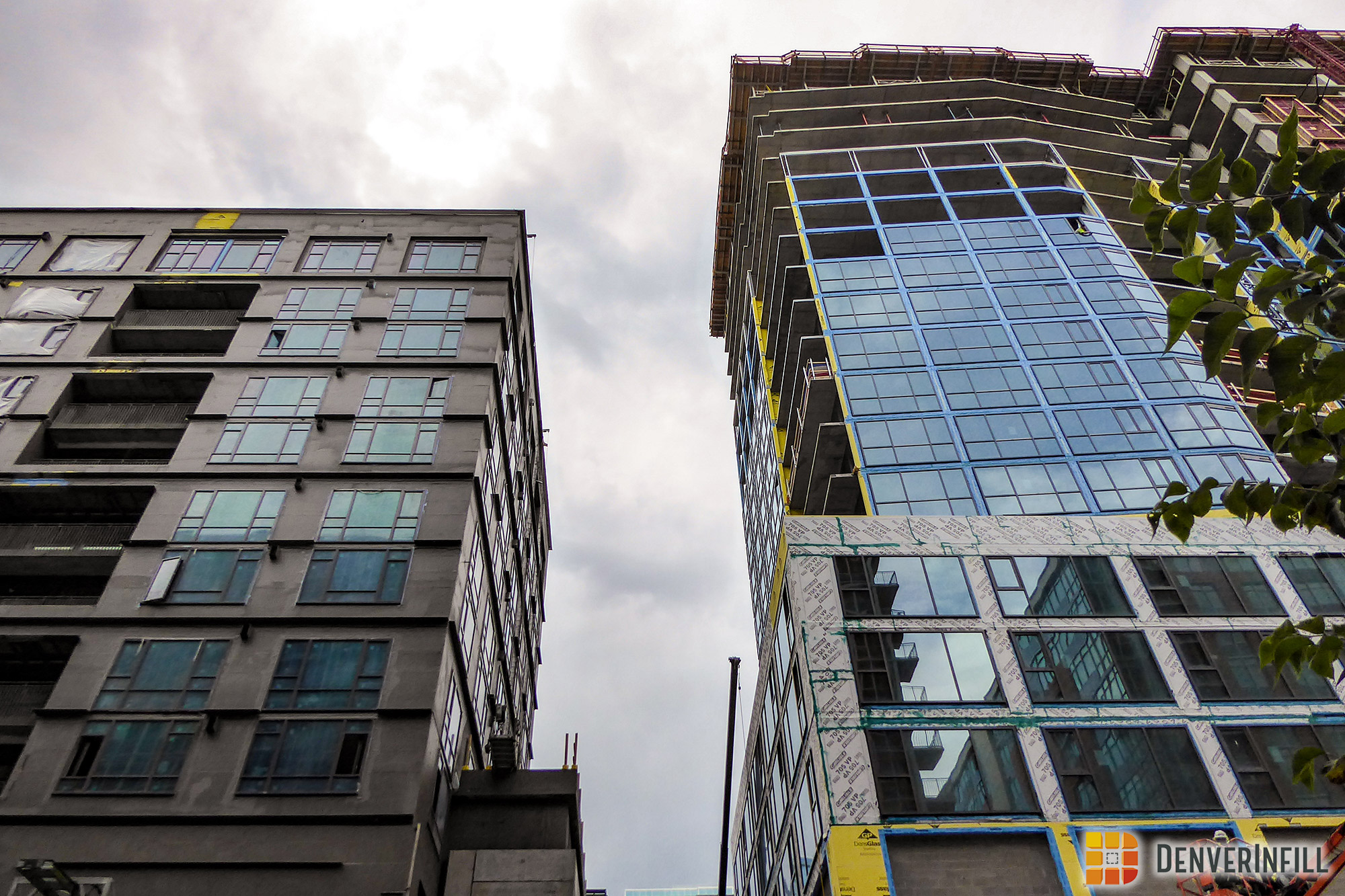 From near 18th and Chestnut looking back toward 16th Street, we are rewarded with an amazing view of the street wall along Chestnut Place. Just think, everything you see in this photo is new in the past five years. 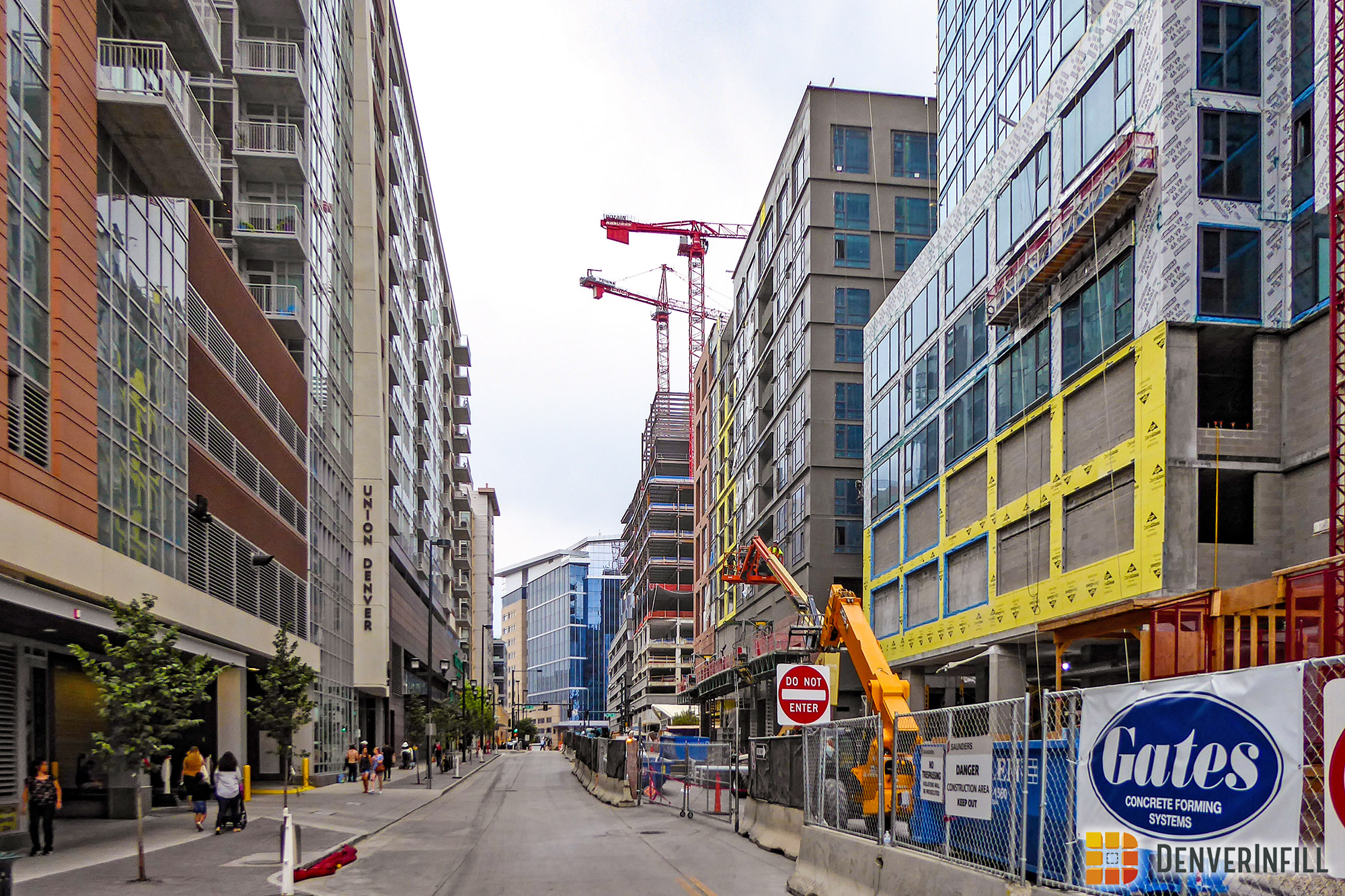 At 18th and Chestnut we get a good view of the North Tower’s northeast and southeast sides. A retail space will anchor the ground floor at this corner too. Both towers’ lobbies will face Chestnut. 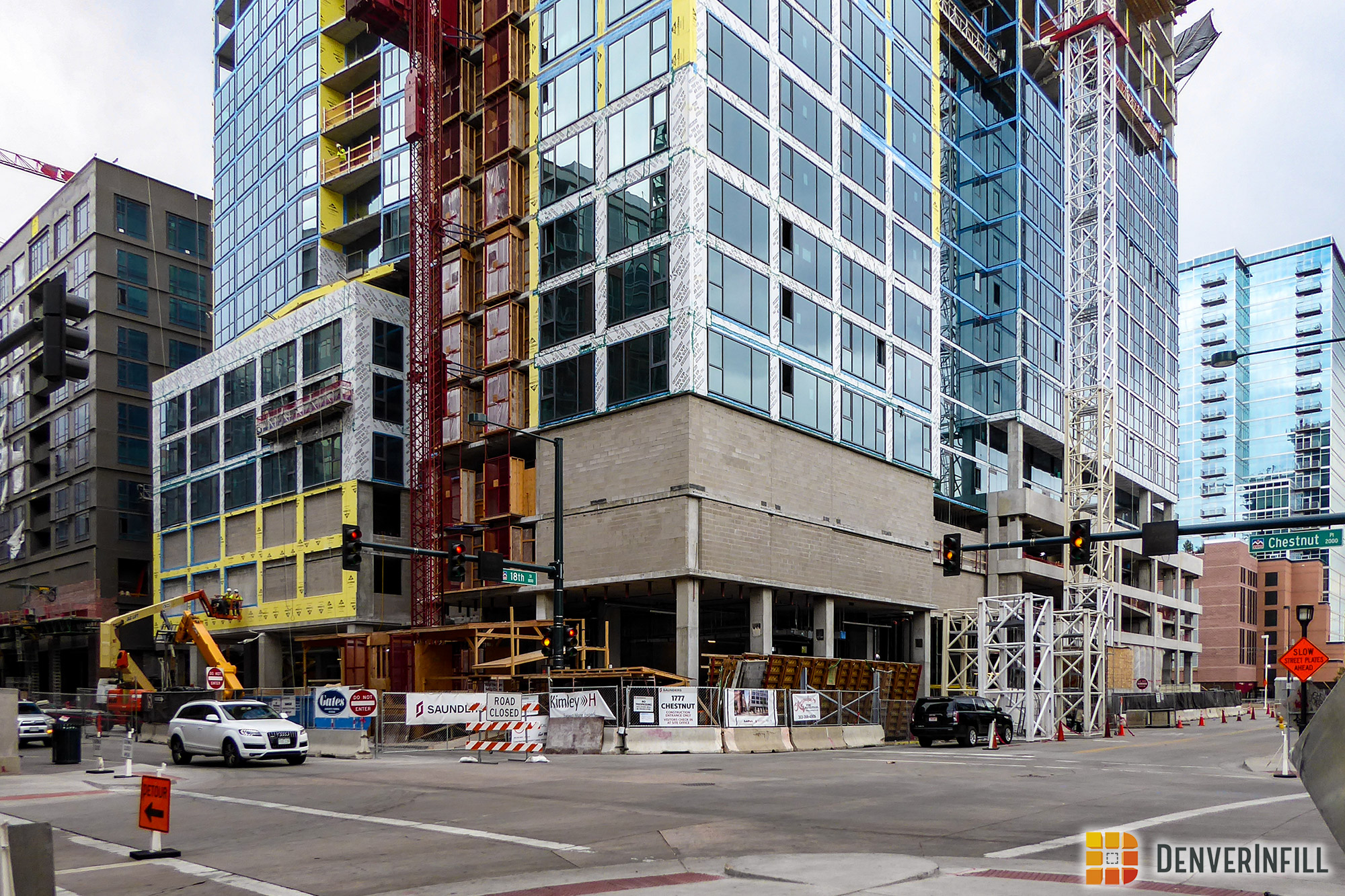 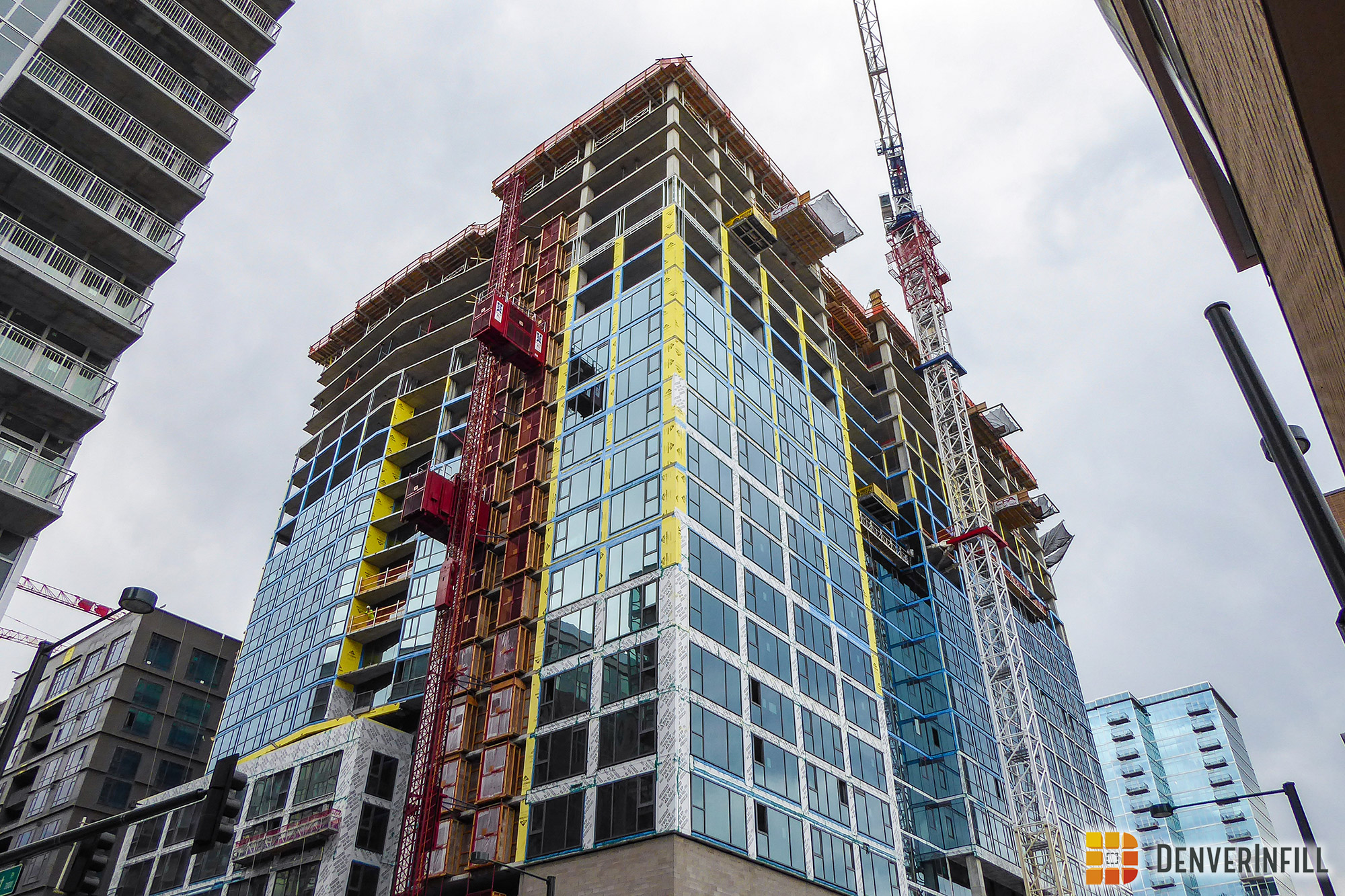 And speaking of street walls, here’s one looking up 18th Street toward LoDo and the Central Business District. Two blocks away, The Coloradan is about half way up to its ultimate 19-floor height.

From the 18th Street Pedestrian Bridge we get a great view of the northwest side of both towers that face the light rail platforms and the ramp to the Union Station Bus Concourse. On this side, the South Tower’s facade changes to a mix of glass and brick. 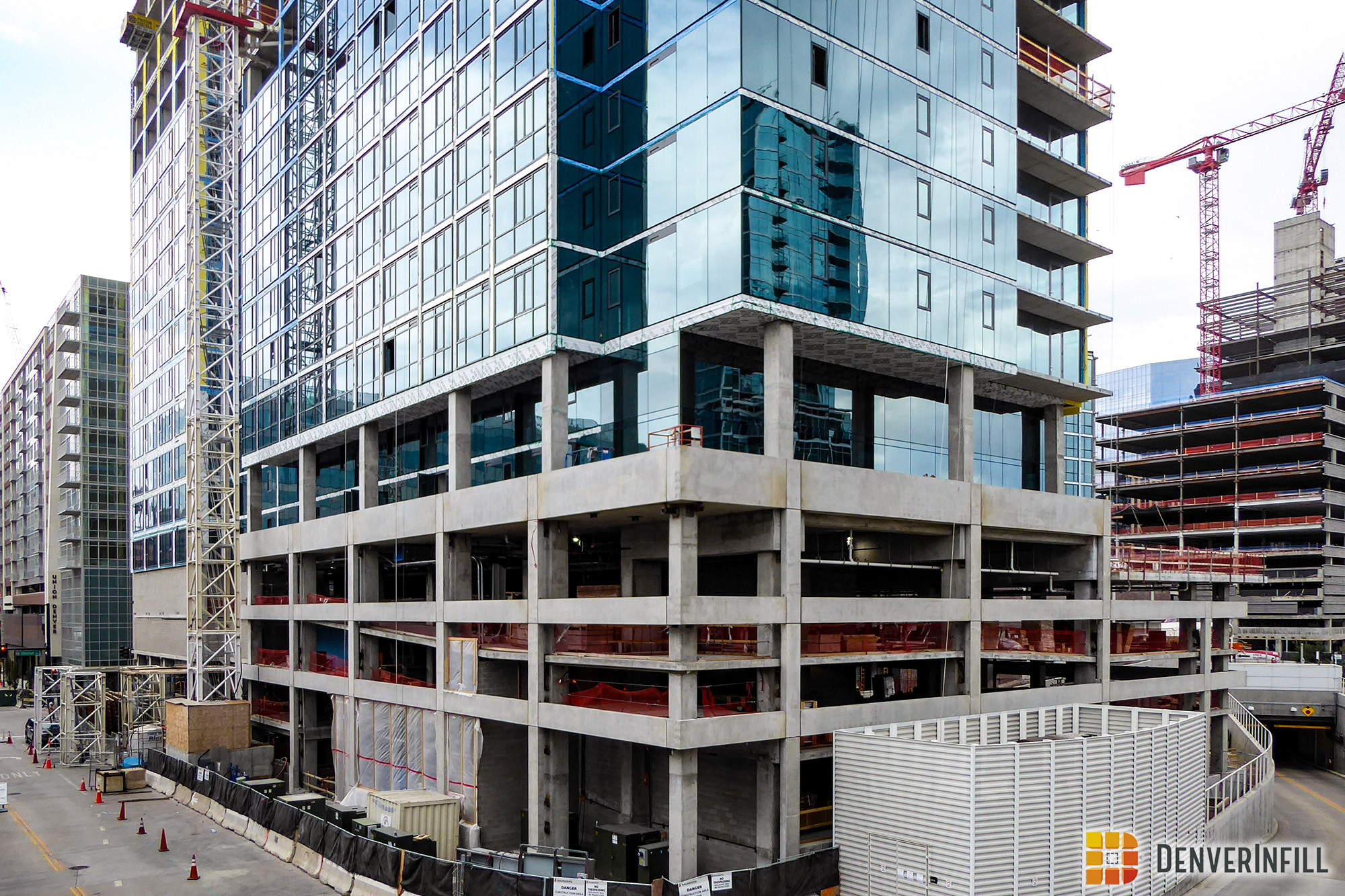 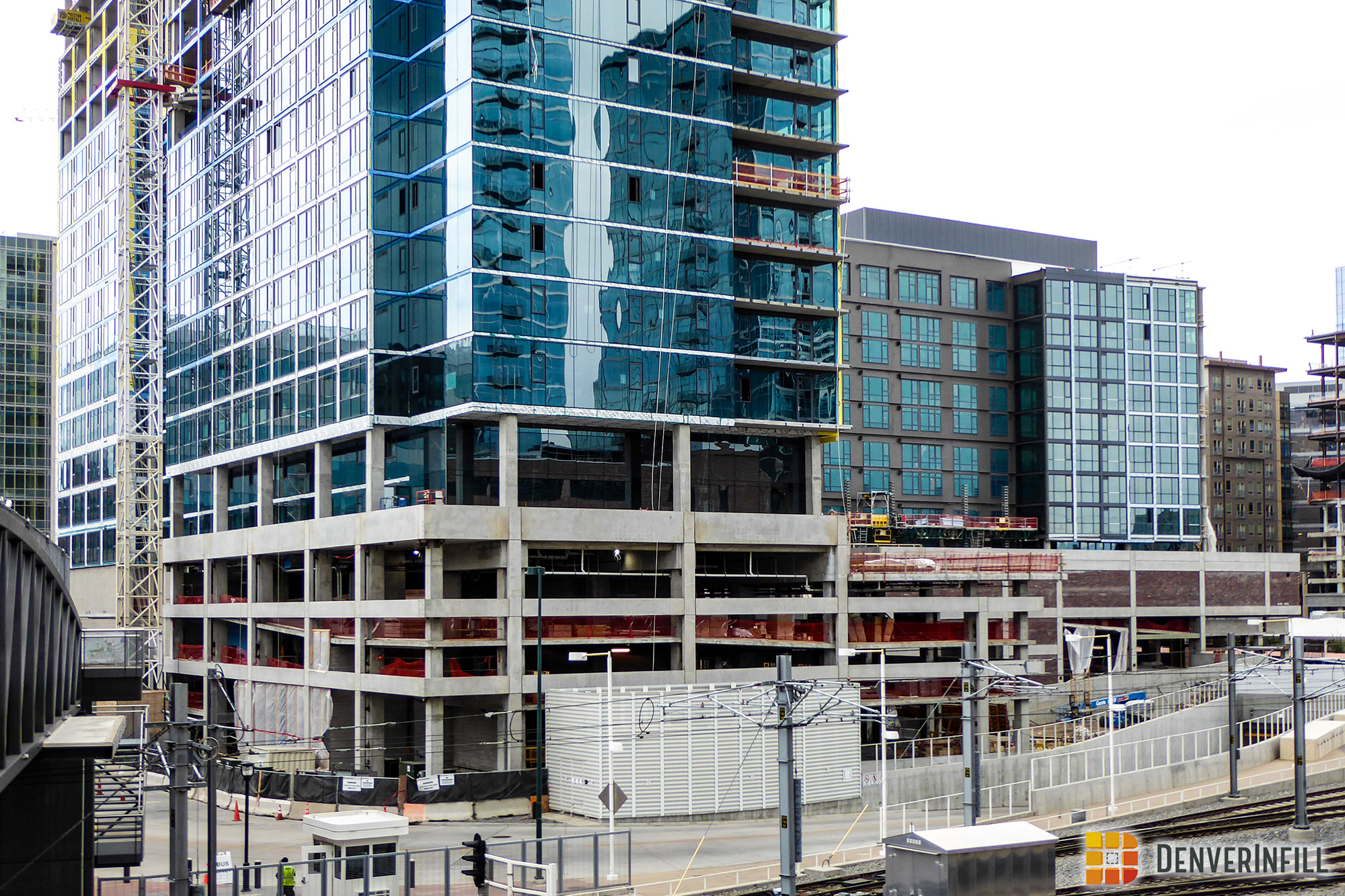 From the light rail platforms and the Millennium Bridge, we can see that the North Tower is L-shaped and features a whole lot of glass. With the last of the three photos below, we are back to 17th Street and the brick facade of the South Tower. 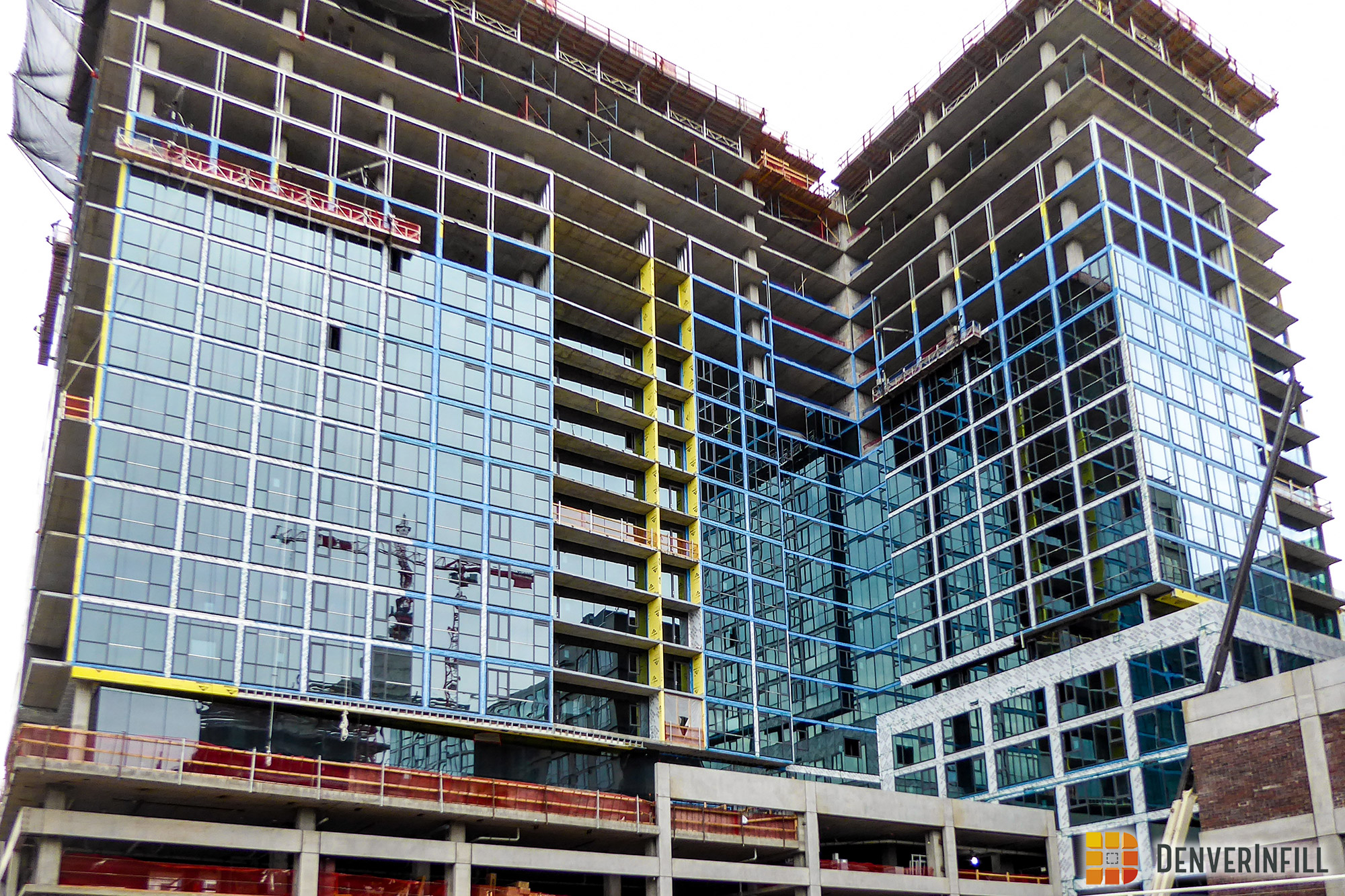 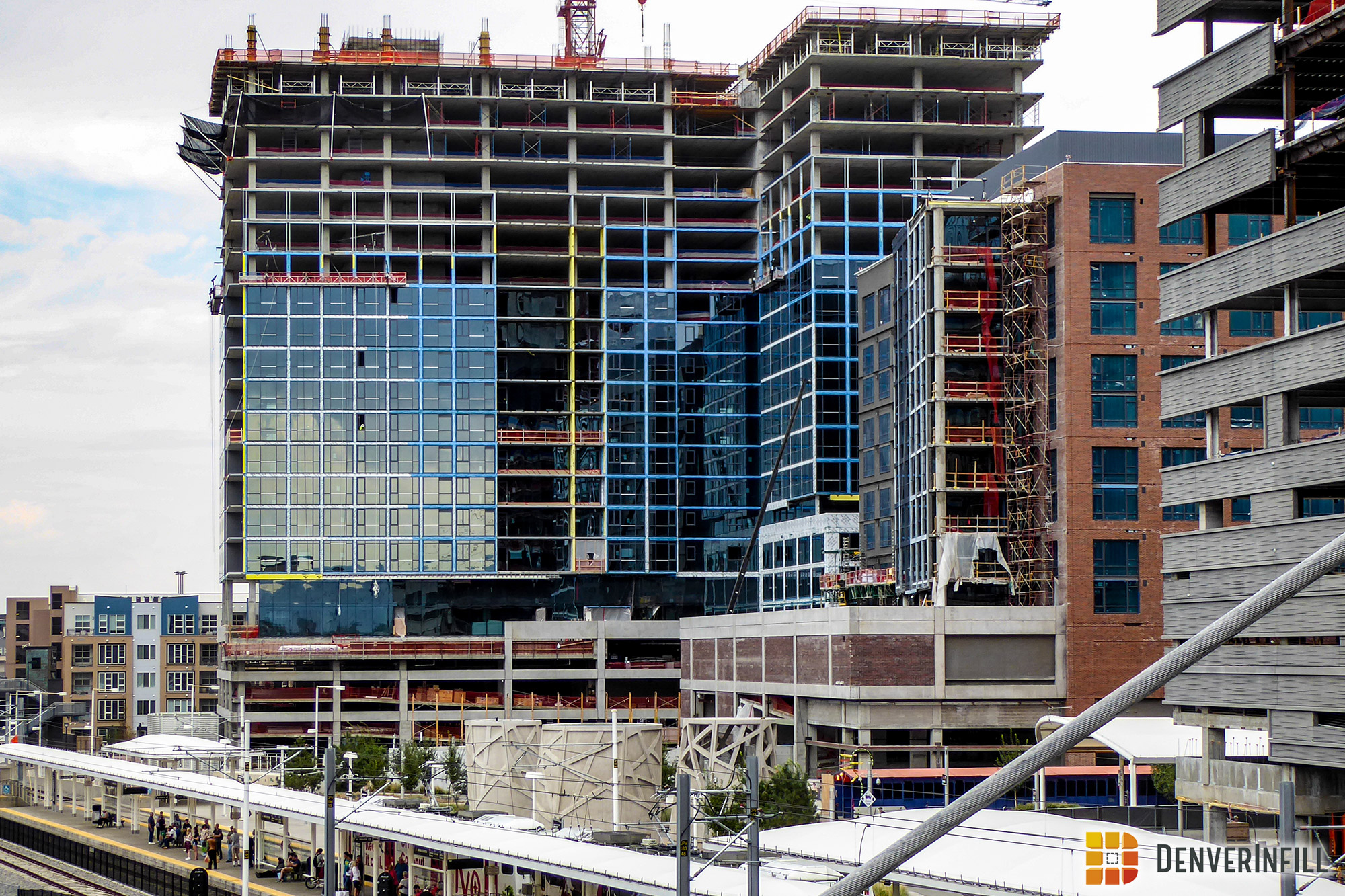 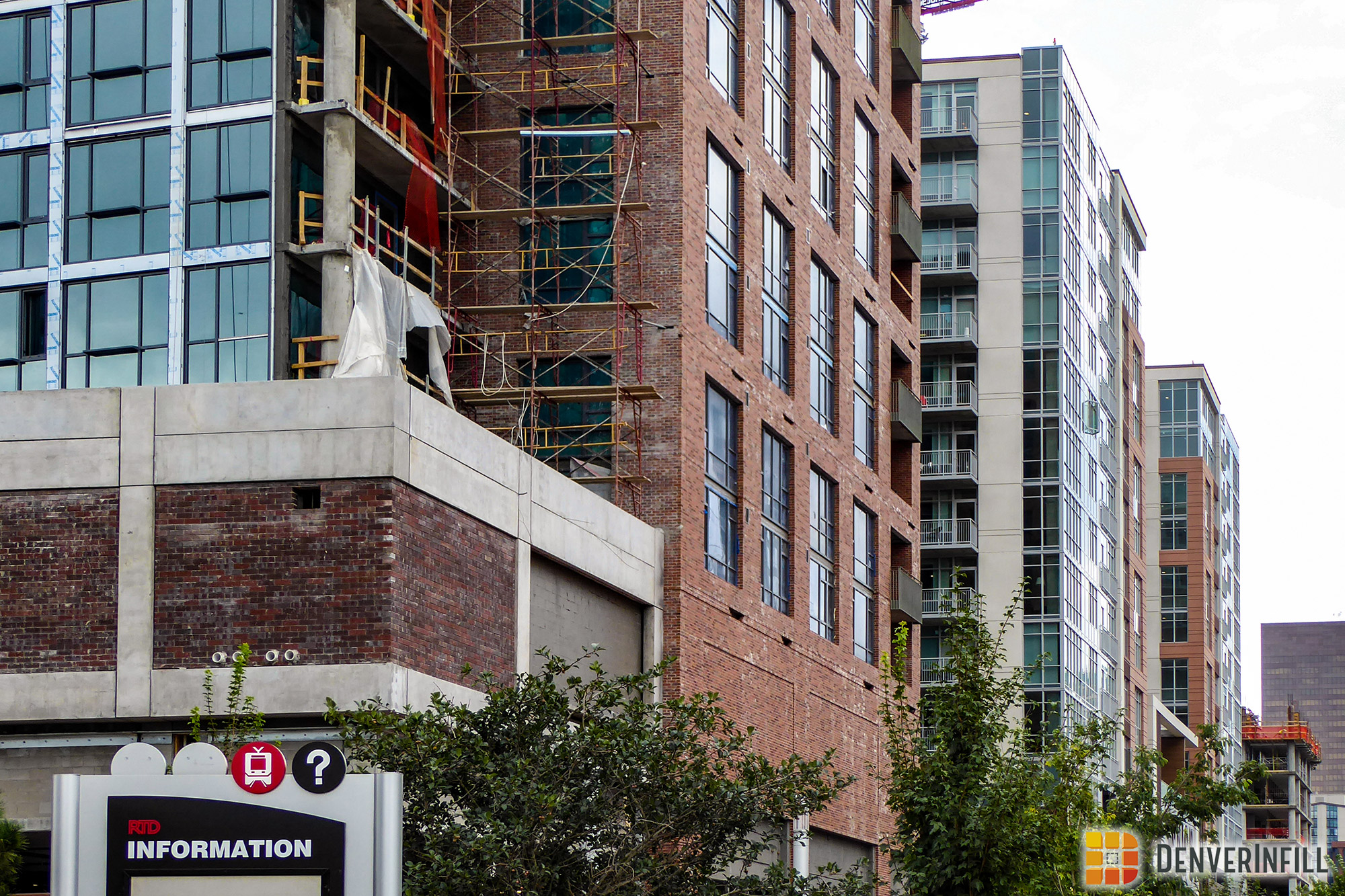 Let’s wrap this post up with a sweet view of The Grand from Commons Park. 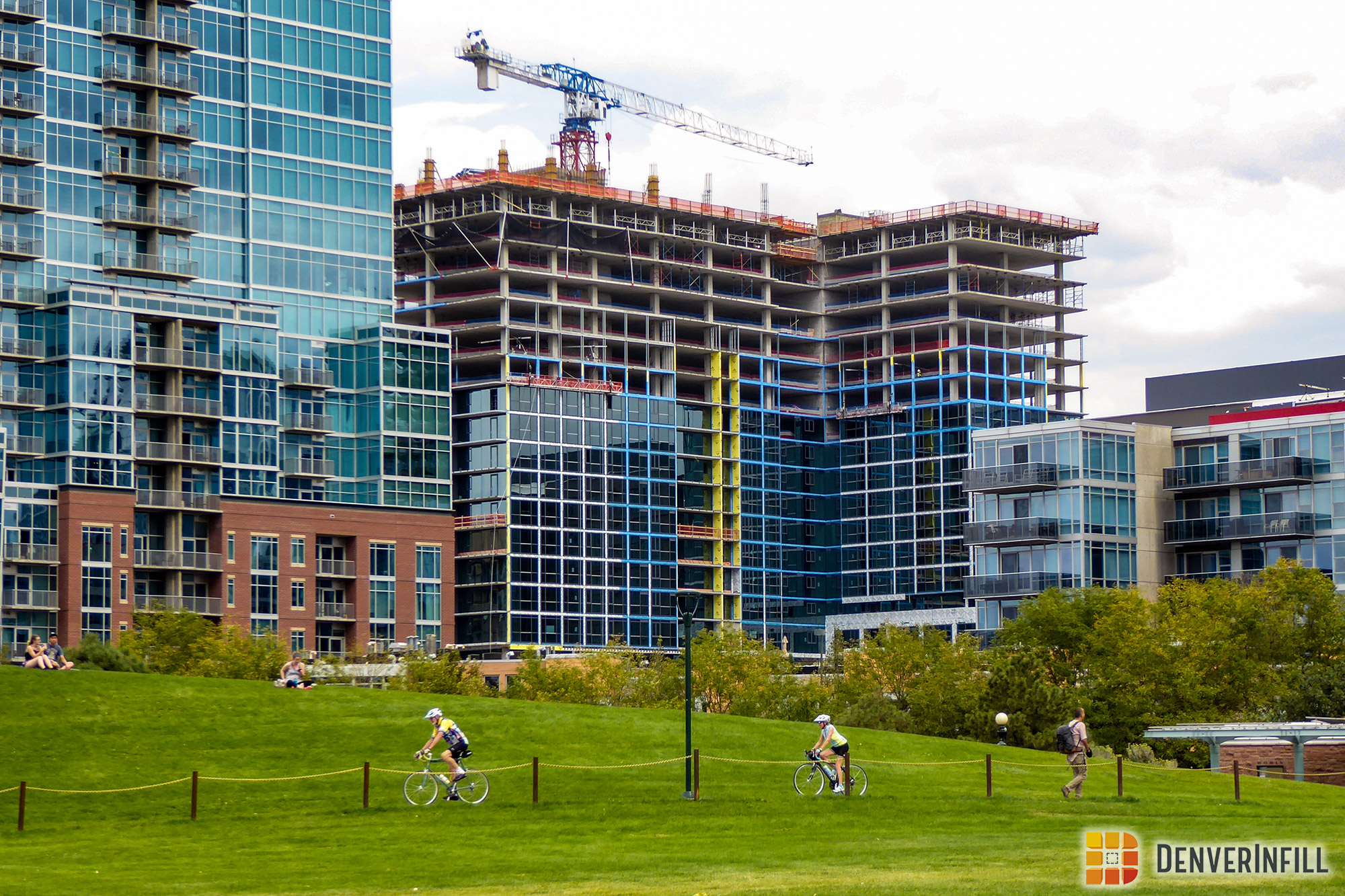 The South Tower still has three more floors to go before topping off. The Grand will open in 2018.