The River Mile
Today we are introducing not a new infill building, but the next great Downtown Denver neighborhood: The River Mile.

The River Mile is envisioned by Revesco Properties, owners of Elitch Gardens, as a new downtown neighborhood to be built along a nearly one-mile stretch of the South Platte River between Speer Boulevard and Auraria Parkway. Adjacent to two transit stations and featuring a bike/ped-oriented design, an inclusive mix of family-friendly and affordable housing options, new waterfront parks and public spaces, retail and restaurants, workplaces, schools and daycare centers, and continued restoration of the South Platte, The River Mile represents the next generation urban neighborhood in Downtown Denver.

For an overview of the exciting long-term vision for The River Mile, please check out the project website and definitely watch the excellent video on the home page. 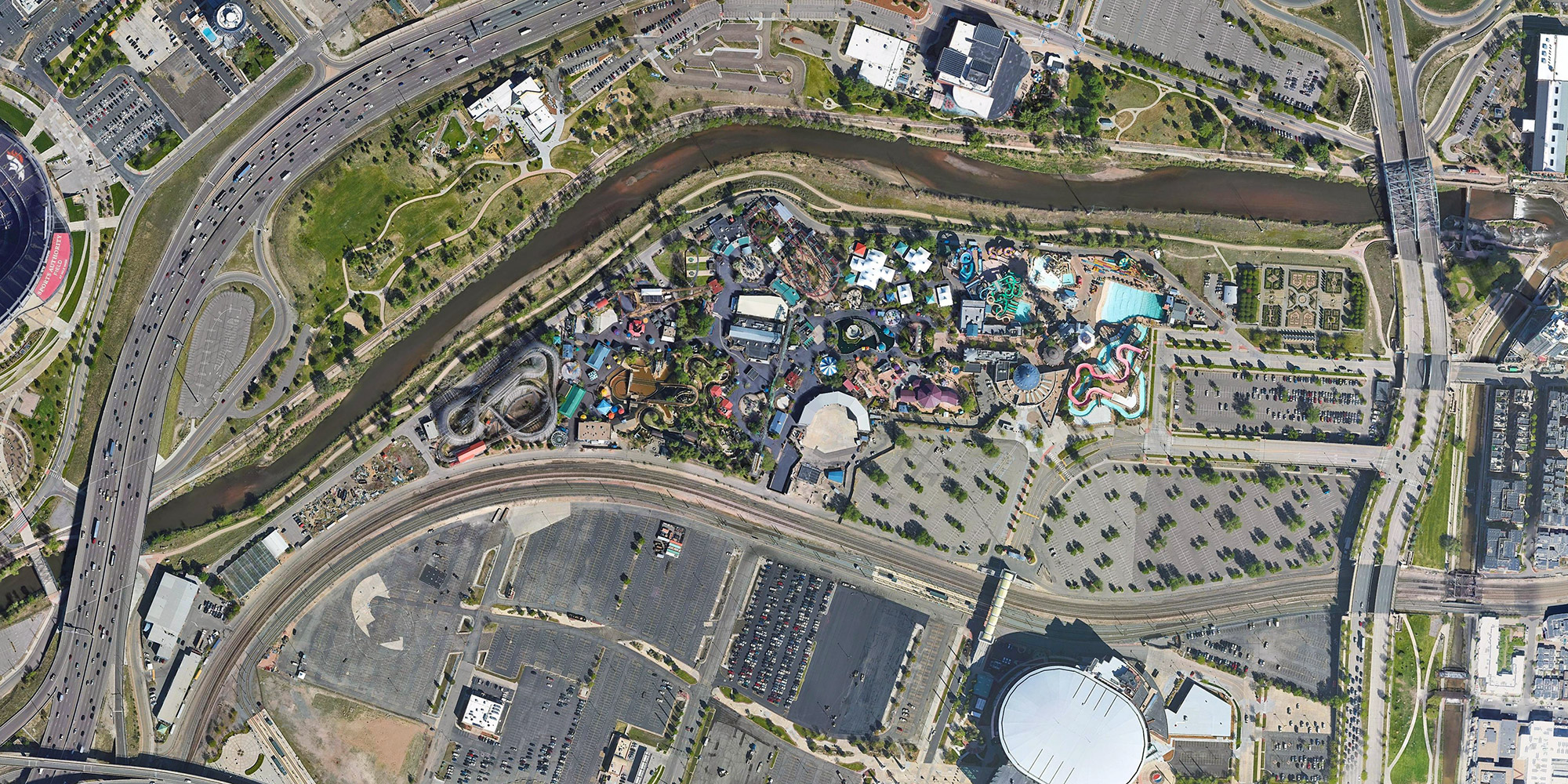 Covering over 60 acres, it will take several decades for the entire River Mile neighborhood to be complete, so phasing is necessary. The first phase will be built on Elitch’s surface parking lots, which occupy about 18 acres—not an insignificant amount of land. That’s about the same size as the part of the Riverfront Park neighborhood between the Millennium Bridge and 19th Street. The first phase would include structured parking for visitors to Elitch’s, allowing the amusement park to remain open throughout the development of the first phase. The image below, courtesy of Revesco Properties, shows the conceptual site plan for The River Mile’s first phase. 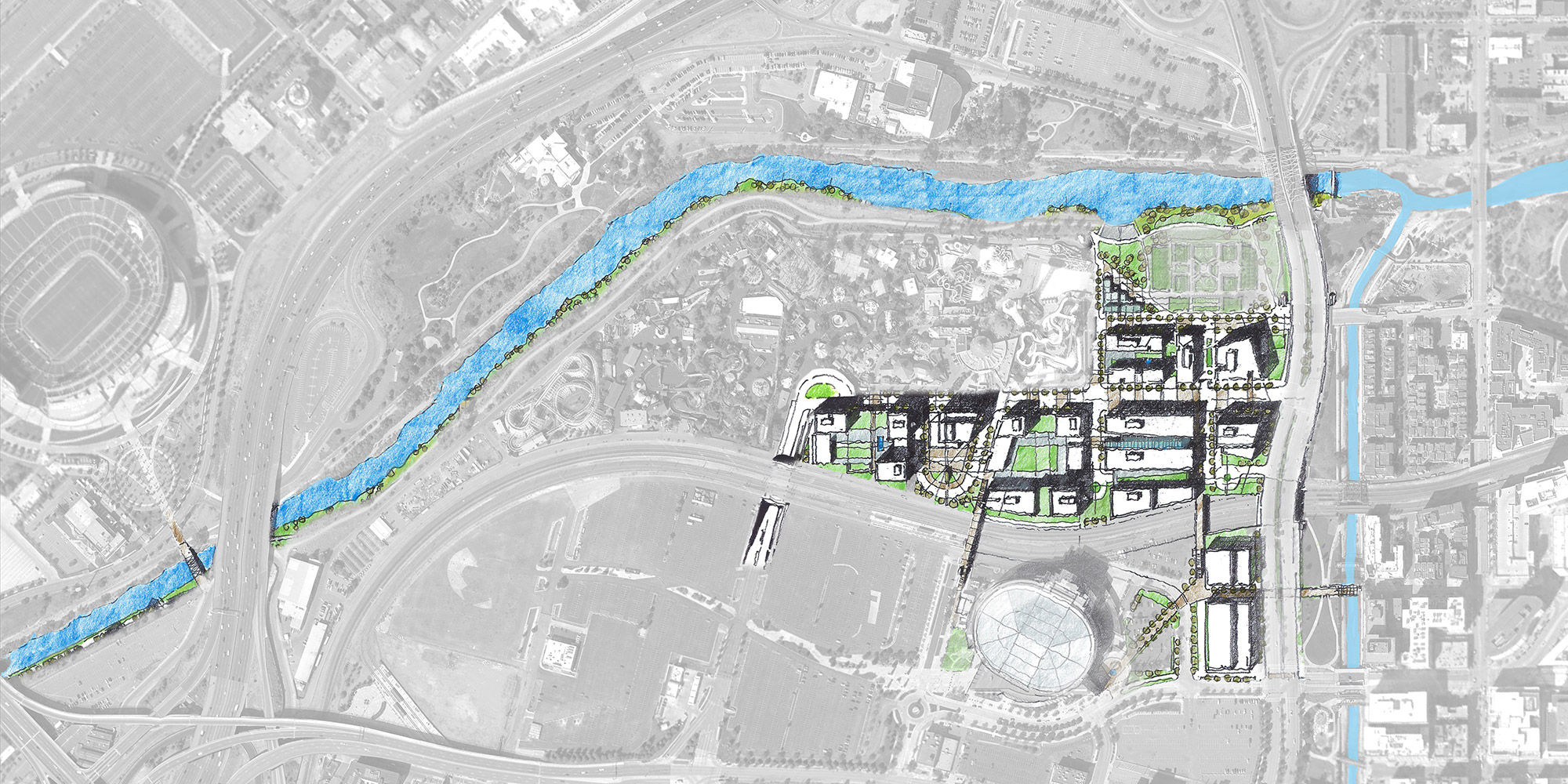 Upon the completion of the first phase, the development of future phases would follow after the amusement park has moved to a new location. The images below, courtesy of Revesco and their design team of Shears Adkins Rockmore, Wenk Associates, and DIALOG, give us a glimpse of the exciting potential for a new downtown neighborhood along the river’s edge.

A Brief History of the Central Platte Valley’s Redevelopment
As we like to do here at DenverInfill, let’s provide some historical context to The River Mile project by highlighting some of the planning milestones for this area, as the vision behind The River Mile actually stretches back to the 1980s.

The Central Platte Valley is generally divided into two sides separated by Cherry Creek: the western, or Auraria side and the eastern, or Downtown side. Over the past few decades, several waves of redevelopment have occurred on these two different sides of the valley.

The aerial image below from 1992 shows the largely-empty Central Platte Valley before any redevelopment had occurred, although the 20th Street Viaduct reconstruction was underway and site work was starting for Coors Field (lower right corner). 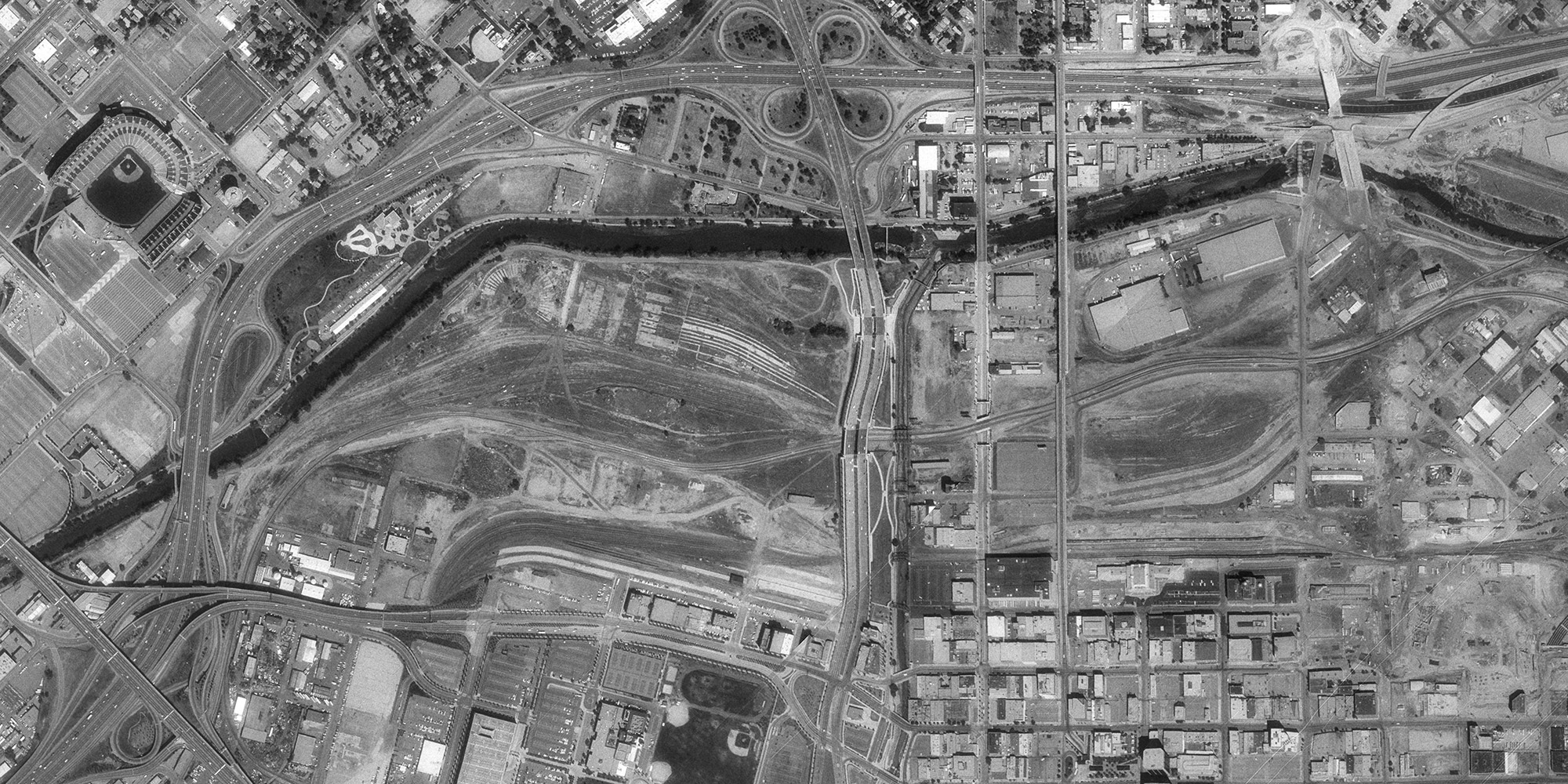 The First Wave – Elitch Gardens and the Pepsi Center
By the 1980s, Denver’s Central Platte Valley, the large swatch of land spanning along the northwestern side of downtown, was ripe for redevelopment. The rail yards and industrial uses that had once covered the area were mostly gone, and the city was eager to see the valley—a huge physical and psychological barrier separating northwest Denver from downtown—transformed into new dense mixed-use districts along a string of riverside parks. This vision was vividly illustrated in this exhibit from the 1986 Downtown Area Plan: 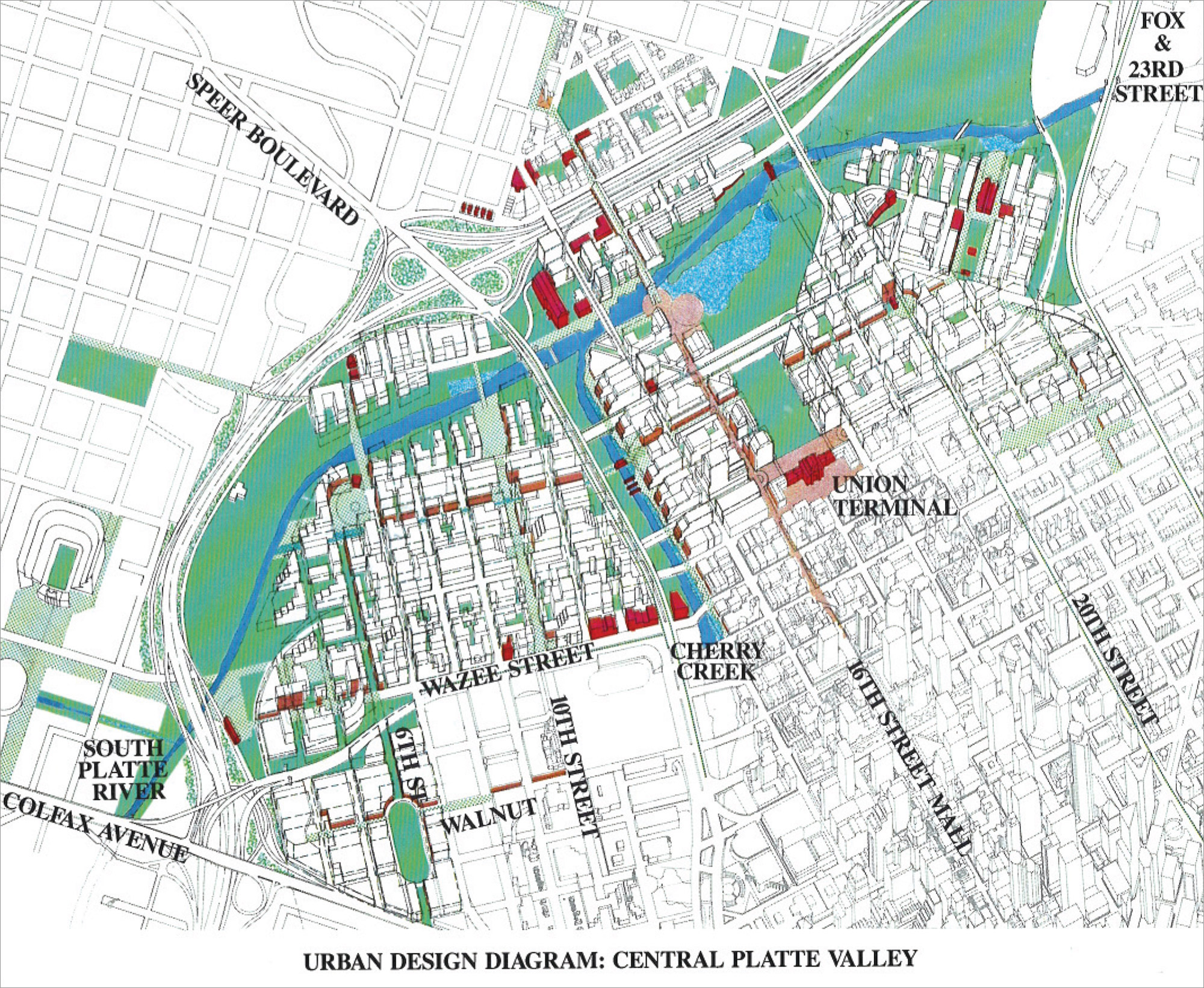 When Elitch Gardens announced their intent to relocate the park from their cramped original site at 38th and Tennyson to a more expansive property elsewhere in the metro area, Denver saw an opportunity: move Elitch’s to the Central Platte Valley. Doing so would not only give Elitch’s the larger site they needed, but the new park would also occupy a good chunk of the valley’s 400 vacant acres with a new exciting use and help kick-start the redevelopment of the area.

In November 1989, Denver voters approved 67% to 33% the sale of $14 million in general obligation bonds “to construct and install public improvements in the Central Platte Valley designed to encourage and facilitate the location of businesses and amusement facilities, such as Elitch Gardens, in the area, which may include but shall not be limited to streets, storm drainage facilities, river channel and flood plain improvements and water and sewer utilities.” In 1995, the new Elitch Gardens opened. Here’s a photo I took of Elitch’s from the Jefferson Park neighborhood in 1996, about a year after the amusement park opened: 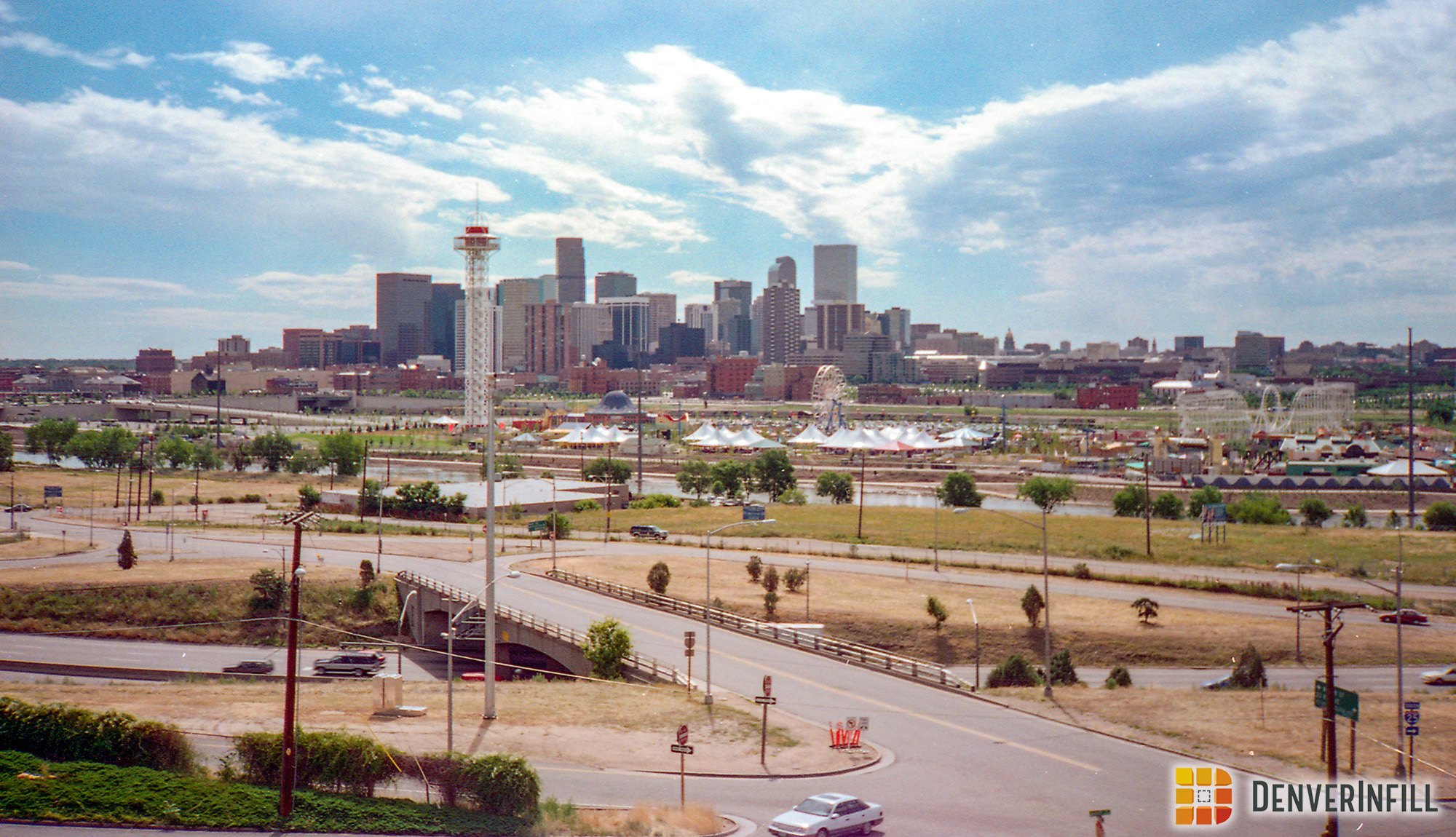 Meanwhile, the owners of the Denver Nuggets and the then new-to-Denver Colorado Avalanche determined that the city’s 1970s-era McNichols Arena was outdated and a new modern facility was needed to keep the two teams financially viable. The remaining undeveloped portion of the Auraria side of the Central Platte Valley across the tracks from the new Elitch’s proved to be an attractive site for a new arena. In 1997, ground was broken on the Pepsi Center and the arena opened in 1999. Just as the 20th Century was coming to a close, the first wave of the valley’s redevelopment was complete. Two major entertainment facilities with a sea of surface parking consumed a lot of land, but they got the valley’s redevelopment off to a good start.

The Second Wave – Riverfront Park
Across Cherry Creek on the Downtown side of the valley, a more urban redevelopment plan consistent with the vision from the 1986 Downtown Area Plan was taking shape. The 1991 Central Platte Valley Comprehensive Plan Amendment provided the organizing framework for what would become the Riverfront Park and Union Station areas, as seen below in the “full buildout” diagram from that plan. While parts of this plan were modified in subsequent updates and refinements, this 1991 CPV plan set the stage for the urban-scale development we see today on the eastern side of the valley. 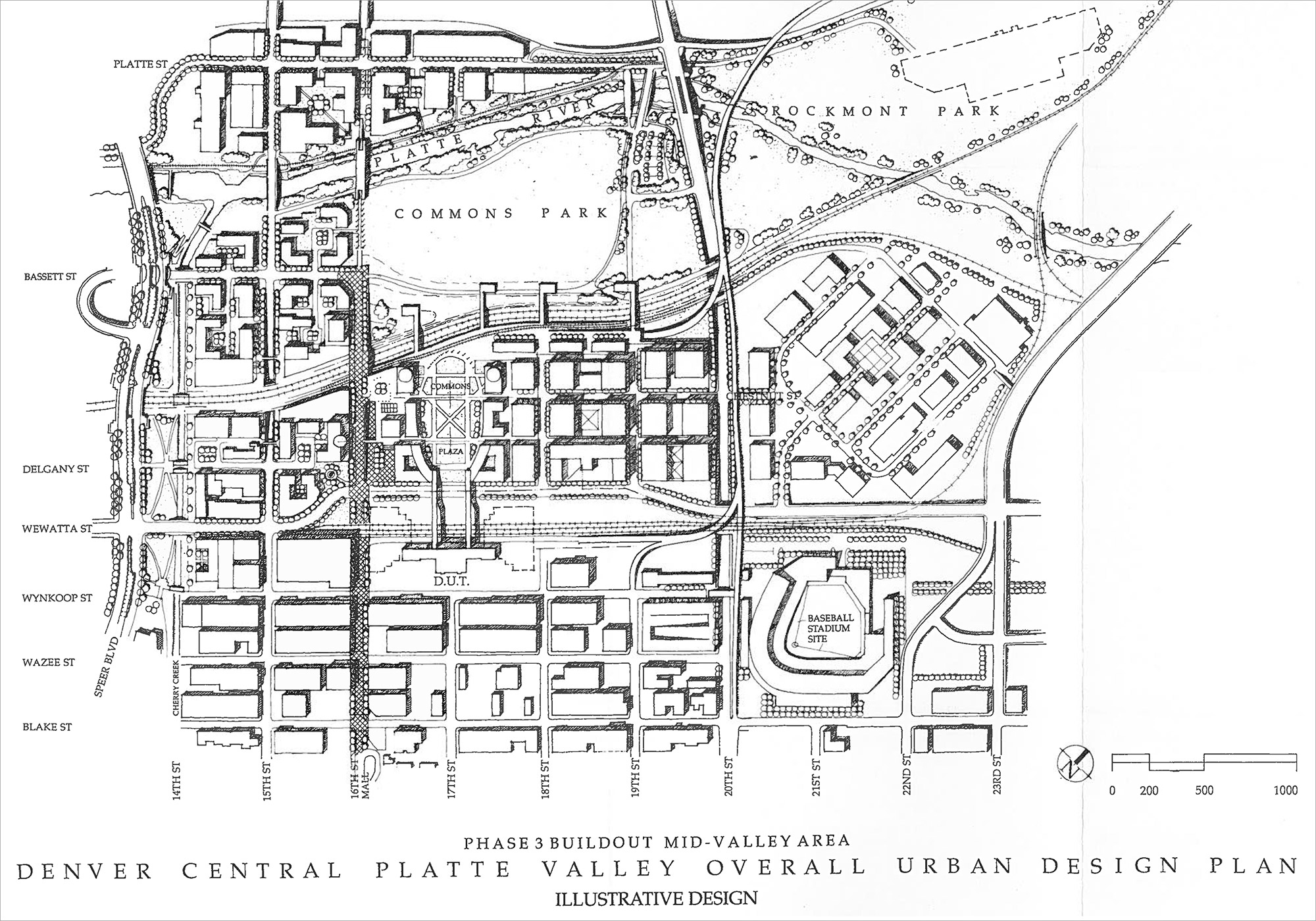 By 1999, work got started on the initial development on the Downtown side of the valley with East West Partners’ Riverfront Park neighborhood. In the aerial image below (courtesy USGS EROS Center) taken on October 4, 1999, grading is underway for Commons Park, and the s-curve path of Little Raven Street is taking shape. Across the creek, the Pepsi Center was just three days past its October 1, 1999 opening day when this aerial photo was taken. On the left edge of the image, the new Mile High Stadium is under construction next to the original. Comparing this image to the 1992 aerial above (both cropped to the same extent), we can see the progress made in just seven years. 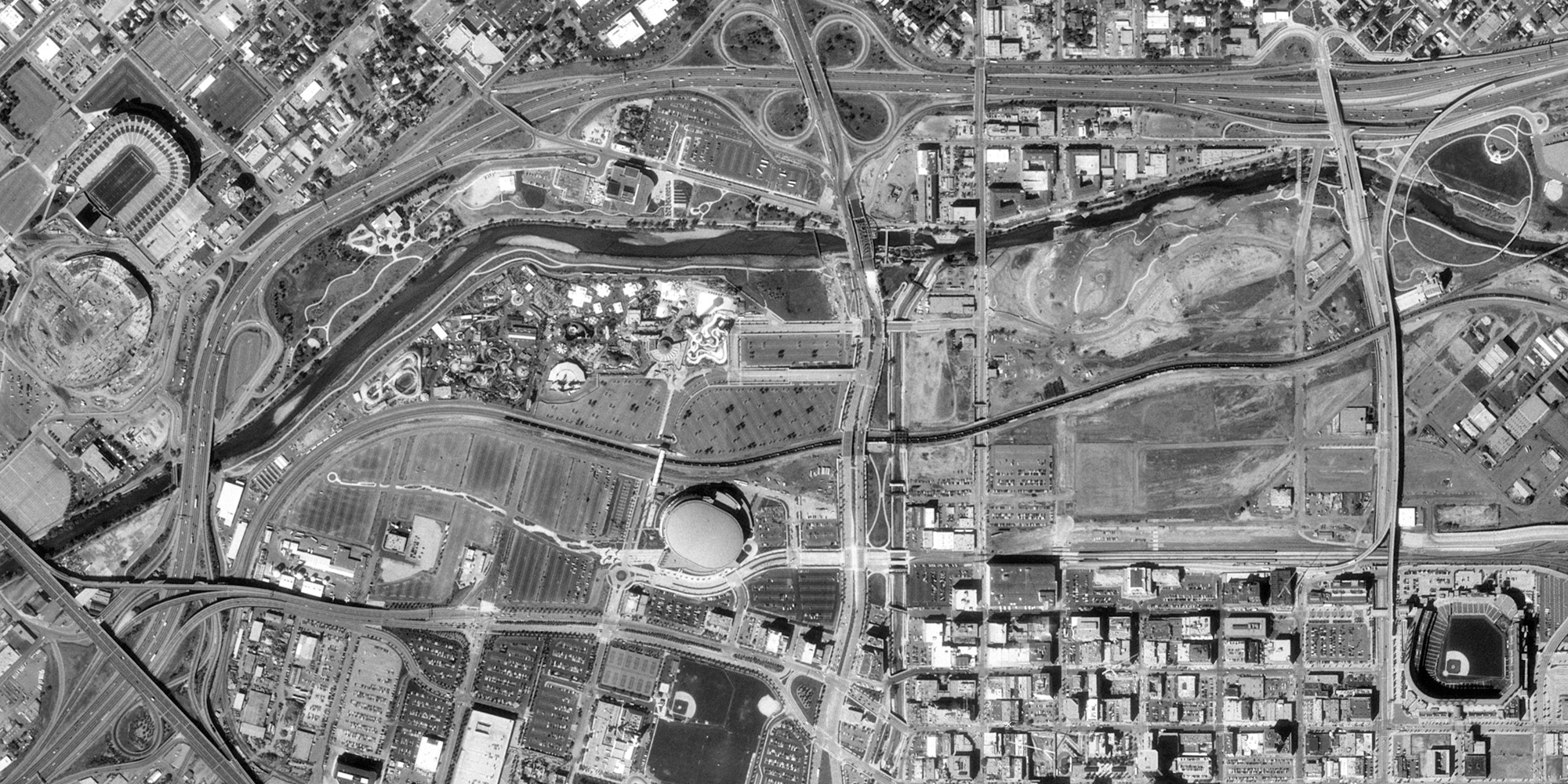 The development of Riverfront Park proceeded at a quick pace into the 2000s. By 2004, five buildings had been completed and three more were under construction, as can be seen in this bird’s-eye photo (courtesy City & County of Denver) taken in May 2004. On the image, I’ve outlined the boundary of the Riverfront Park development area. 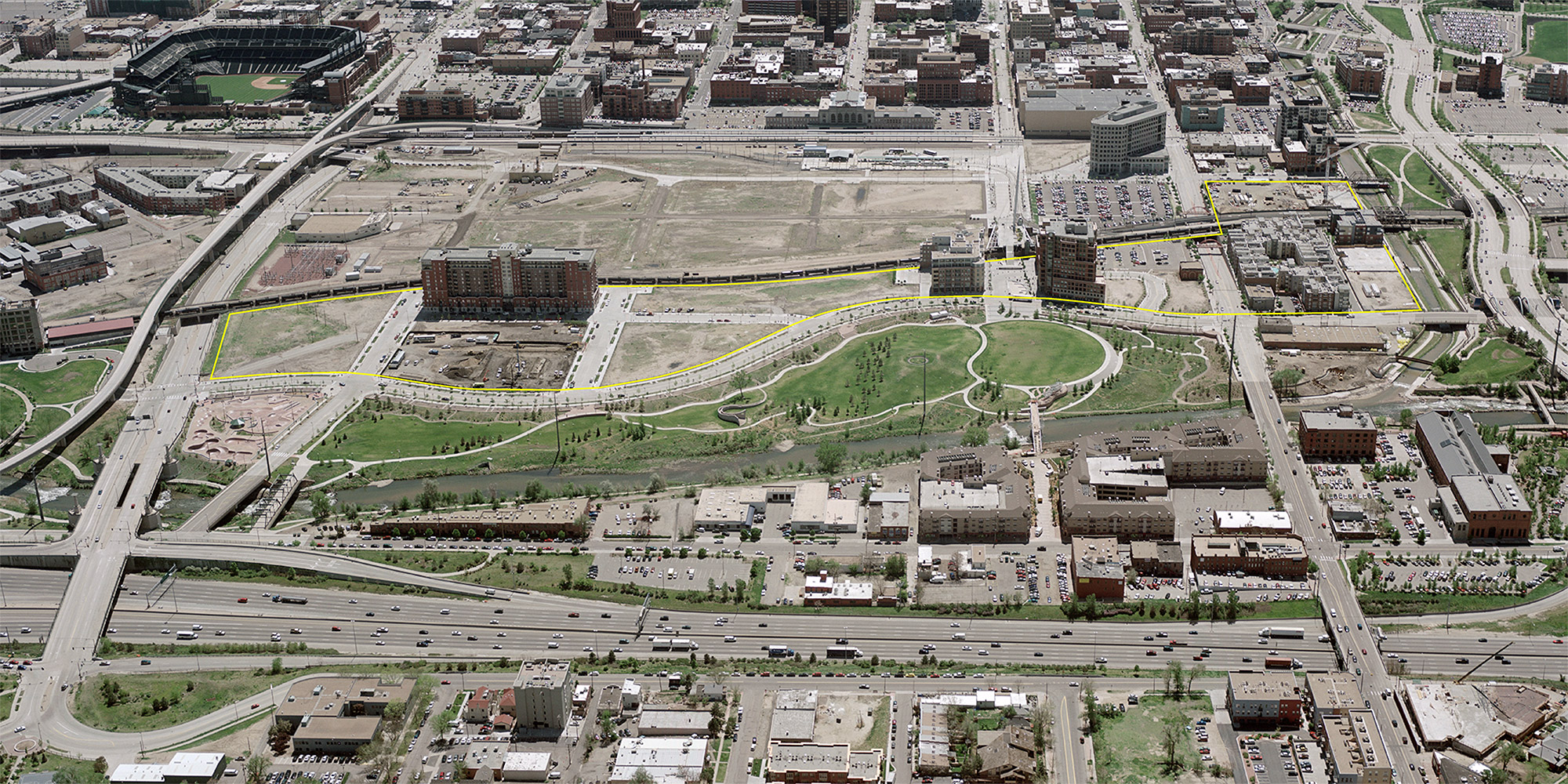 For more on Riverfront Park’s growth, check out this post from 2010. With the Parkside Apartments and Riverfront Green projects wrapping up construction—the last remaining major parcels of the Riverfront Park neighborhood—the second wave of the Central Platte Valley’s development is almost complete.

The Third Wave – Union Station District
Several planning documents in the early 2000s continued to refine the layout for future development of the area behind Union Station. The 2004 Union Station Master Plan (PDF) had a big impact on establishing the future vision for the area, but in the years that followed, the layout for the transit infrastructure was in a state of flux. Ultimately, it was the 2008 Denver Union Station Master Plan Update (PDF) that finalized the configuration of the transit and street infrastructure for the area.

The first new building in the area behind Denver Union Station was the Gates Headquarters building at 15th and Wewatta. Originally known as Legacy Plaza, the 10-story office building was completed in 2002 and is visible in the 2004 bird’s-eye photo above. The next project, the 18-story 1900 16th Street building, was announced in late 2006 and was completed in September 2009. DenverInfill was around by then, so you can follow that building’s progress here. These were the only buildings developed in the area behind Union Station before construction started on the Denver Union Station Transit Center.

With construction starting on the Transit Center in 2010 (which DenverInfill covered thoroughly in 145 posts) and with the local economy quickly recovering from the recession, development in the Union Station district really started taking off. First up was the DaVita Headquarters, announced in July 2010 and completed in late 2012. That was followed by a tsunami of 18 project announcements and groundbreakings in the Union Station district in the last five years that will result in essentially the full buildout of the district—the completion of the Central Platte Valley’s third wave of development.

To visually convey the great change that has occurred in the Union Station area during the past decade, here are two aerial images, one from 2008 and the other from 2017: 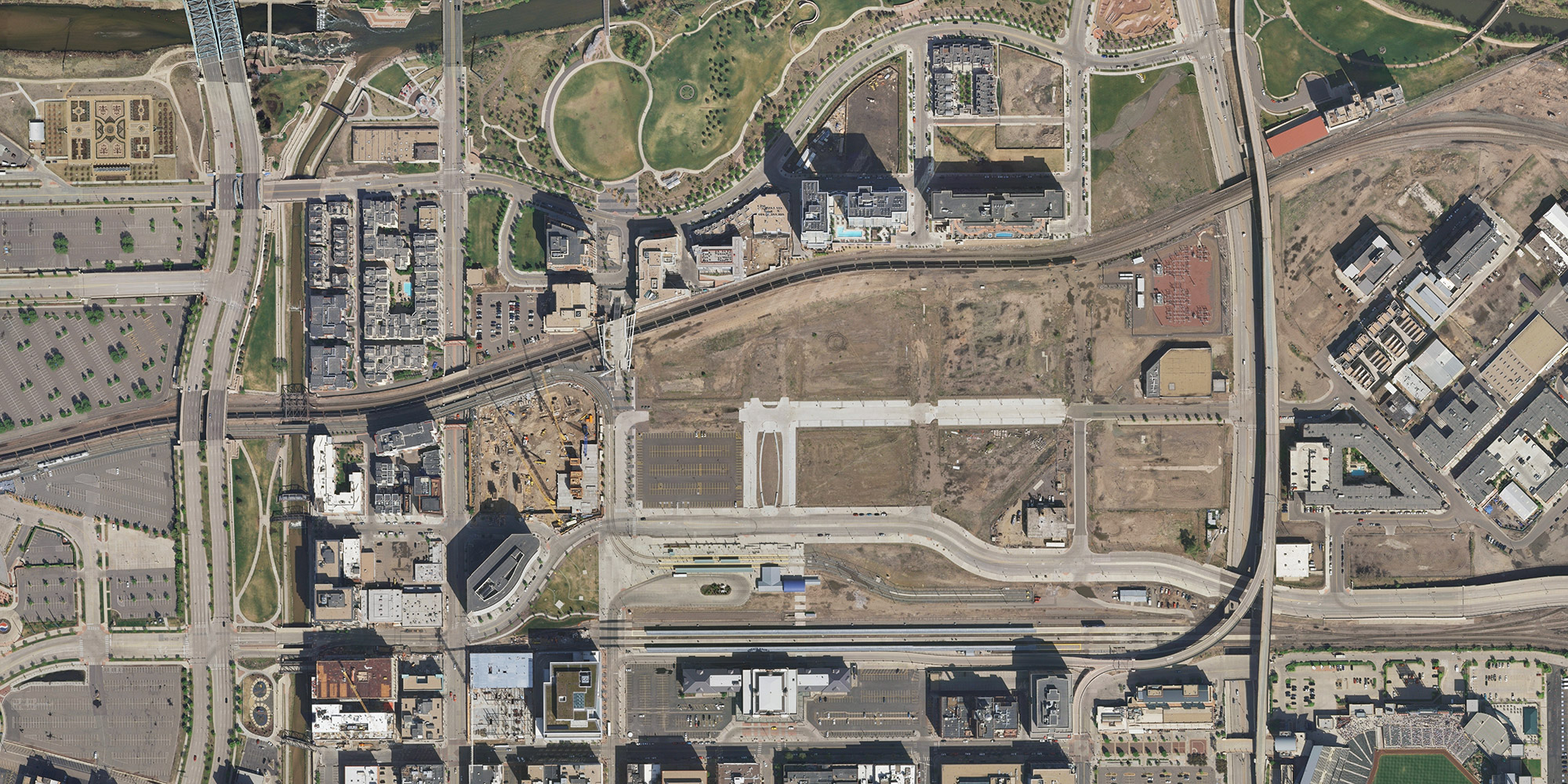 And here’s one more photo. This was taken on a gloomy November day in 2017 but it nicely shows the intensity of the Central Platte Valley’s third wave of development: 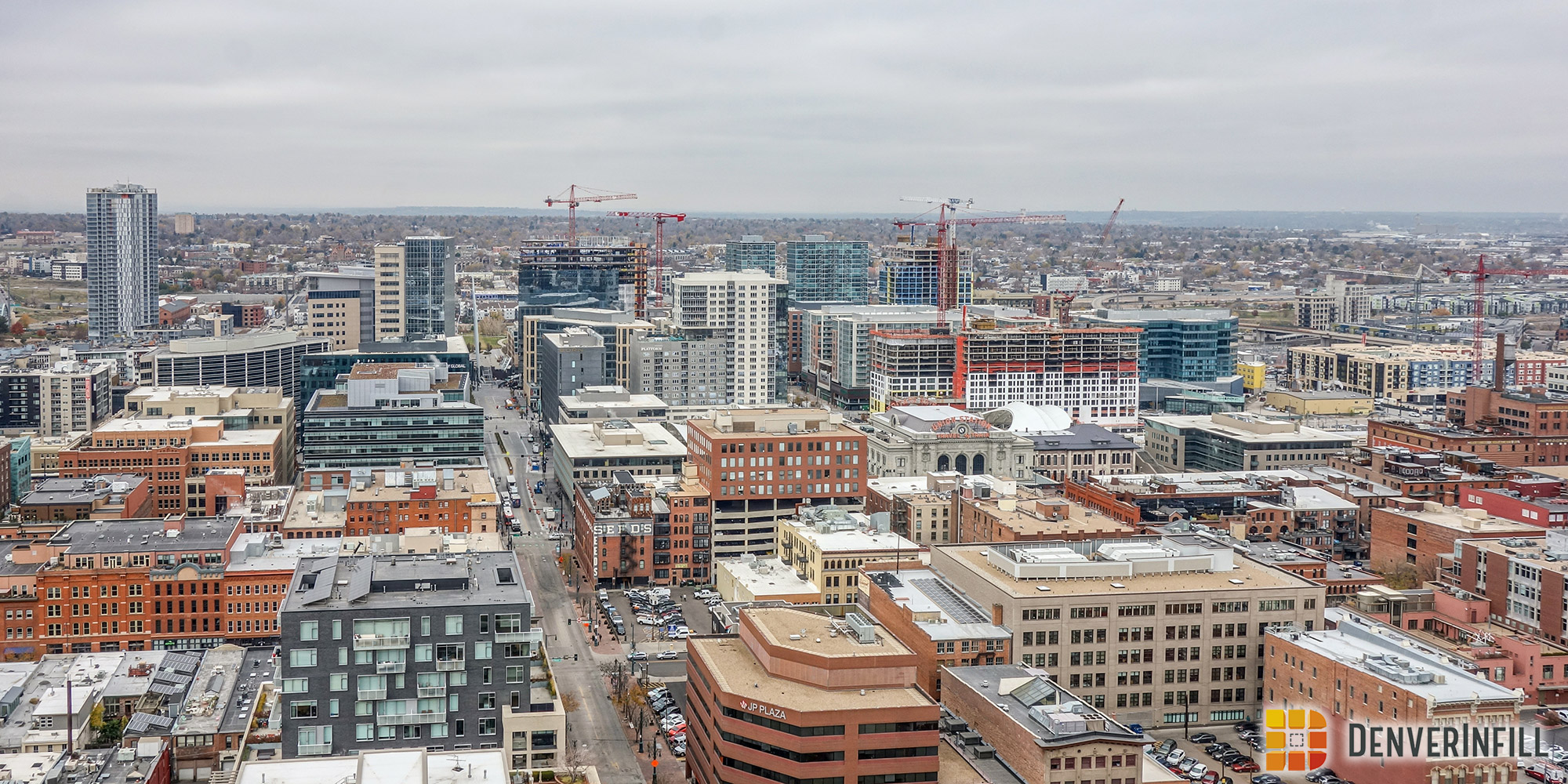 The Fourth Wave – The River Mile
We arrive back to the present from our journey through the history of planning and development of Downtown Denver’s Central Platte Valley, with the fourth wave of development poised to replace what was created in the first wave. The 2020s will belong to The River Mile, but perhaps the 2020s will also belong to Elitch’s neighbor, the Pepsi Center. Clearly, the Pepsi Center area suffers from an even worse case of parkinglotitis than Elitch’s, so it wouldn’t come as a surprise if a bold new redevelopment plan for the Pepsi Center area emerges one of these days as well.

And with that in mind, Denver’s Community Planning and Development office has been working on an official amendment to the 2007 Downtown Area Plan for the Pepsi Center/Elitch Gardens area. The 2007 plan generally skipped over this area, as both the amusement park and the arena were relatively new facilities at that time that weren’t expected to change any time soon. But here we are, ten years later, and now is definitely the right time to craft a detailed vision for how the community wants this part of the Central Platte Valley to transform. Once this Downtown Area Plan amendment has been adopted, it will guide all future public and private investments in this part of the Central Platte Valley.

I am looking forward to following The River Mile’s evolution from concept to reality in the coming years as it becomes the next great neighborhood in Downtown Denver.