This past spring we reported on a visionary proposal by Revesco Properties for the long-term redevelopment of Elitch Gardens and its parking lots into a major new downtown neighborhood called the River Mile. As we noted in that first post, this transformation would occur over several decades, with the first phase targeting the redevelopment of the parking lots while a new site and relocation plan for Elitch’s itself is prepared. But for the River Mile project to proceed, several critical planning and zoning updates are necessary. 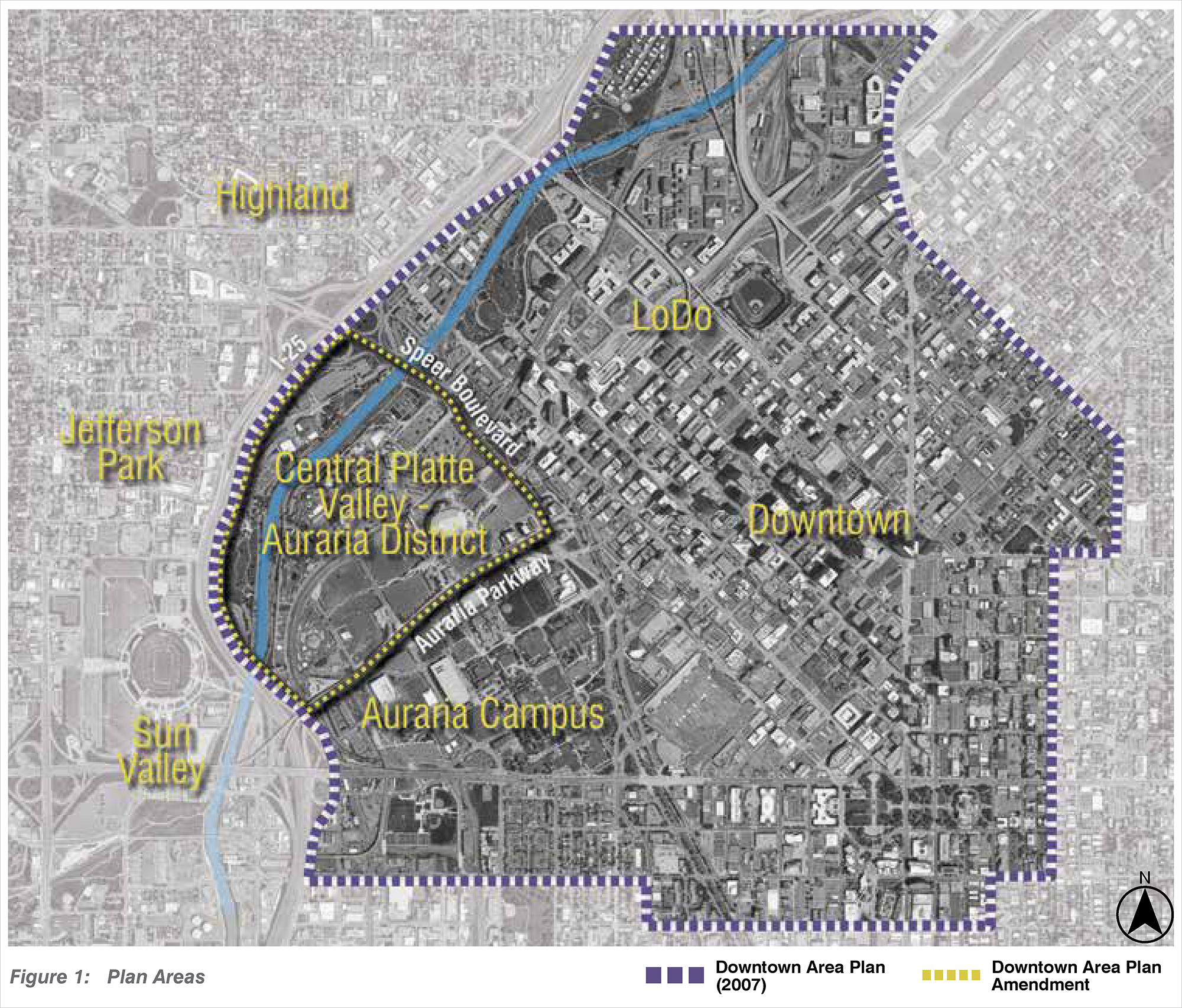 The Downtown Area Plan didn’t address the Central Platte Valley/Auraria district in much detail back in 2007 as both Elitch’s and the Pepsi Center were fairly new facilities at that time not anticipating immediate redevelopment. But eleven years later, development in this area is a possibility as the River Mile proposal demonstrates, so updating the plan for this district became necessary. After a year-long process involving numerous public meetings and stakeholder engagement, Denver CPD completed the “Downtown Area Plan Amendment—Central Platte Valley/Auraria District” that was unanimously approved by the Denver City Council on June 11, 2018.

Zoning Changes
With the new vision for this area in place, the next step is to update the zoning code to facilitate implementing that vision. Most of the districts within Downtown have their own customized zoning category to match the district’s context. For example, the “D-LD” zoning category applies to Lower Downtown and the “D-GT” zoning category applies to the Golden Triangle. Currently, however, the zoning covering the Central Platte Valley/Auraria district isn’t like that. It’s a hodgepodge of different zone classifications mostly focused on allowing large entertainment facilities and big parking lots. Therefore, Denver CPD proposed the creation of three new “D-CPV” zoning categories to regulate things like building sizes, parking, and affordable housing requirements in a manner consistent with the new vision. These new “D-CPV” zoning categories constitute a text amendment to the Denver Zoning Code, which must go through both the planning board and city council.

On October 17, 2018 the Denver Planning Board voted 9-1 to recommend approval to city council. On December 17, 2018, Denver City Council will hold a public hearing and vote on the zoning code text amendment. Assuming approval of the new “D-CPV” zoning categories by council, thereafter, Revesco Properties and any other property owners in the area would be free to submit a request to the city for a zoning code map amendment to apply a new “D-CPV” zoning category to their property.

Next Steps
That’s not all. Soon, Denver CPV will be begin preparing design standards and guidelines for this area that will provide more fine-grained tools and requirements to ensure that the architecture and streetscape designs of future buildings and streets are consistent with the vision for this part of downtown. And for their part, Revesco continues to refine their development plans and work on setting up metro districts for funding the future infrastructure improvements like bridges, streets, and public spaces that will form the backbone to the River Mile redevelopment.

Renderings!
Speaking of public spaces, we are happy to share with you some new renderings, courtesy of Revesco’s design team that includes Shears Adkins Rockmore Architects, Wenk Associates, and DIALOG. Since there are no actual buildings being proposed yet, these images focus on the public realm and are intended to convey the conceptual character of the River Mile’s future public spaces, and not the final design of any specific building or place.

First we have an illustrative concept plan showing the River Mile’s streets, parks, bridges, and building footprints at full build-out, followed by an exhibit depicting the location of the River Mile’s first phase that would occur while Elitch Gardens continues to operate in its current location. 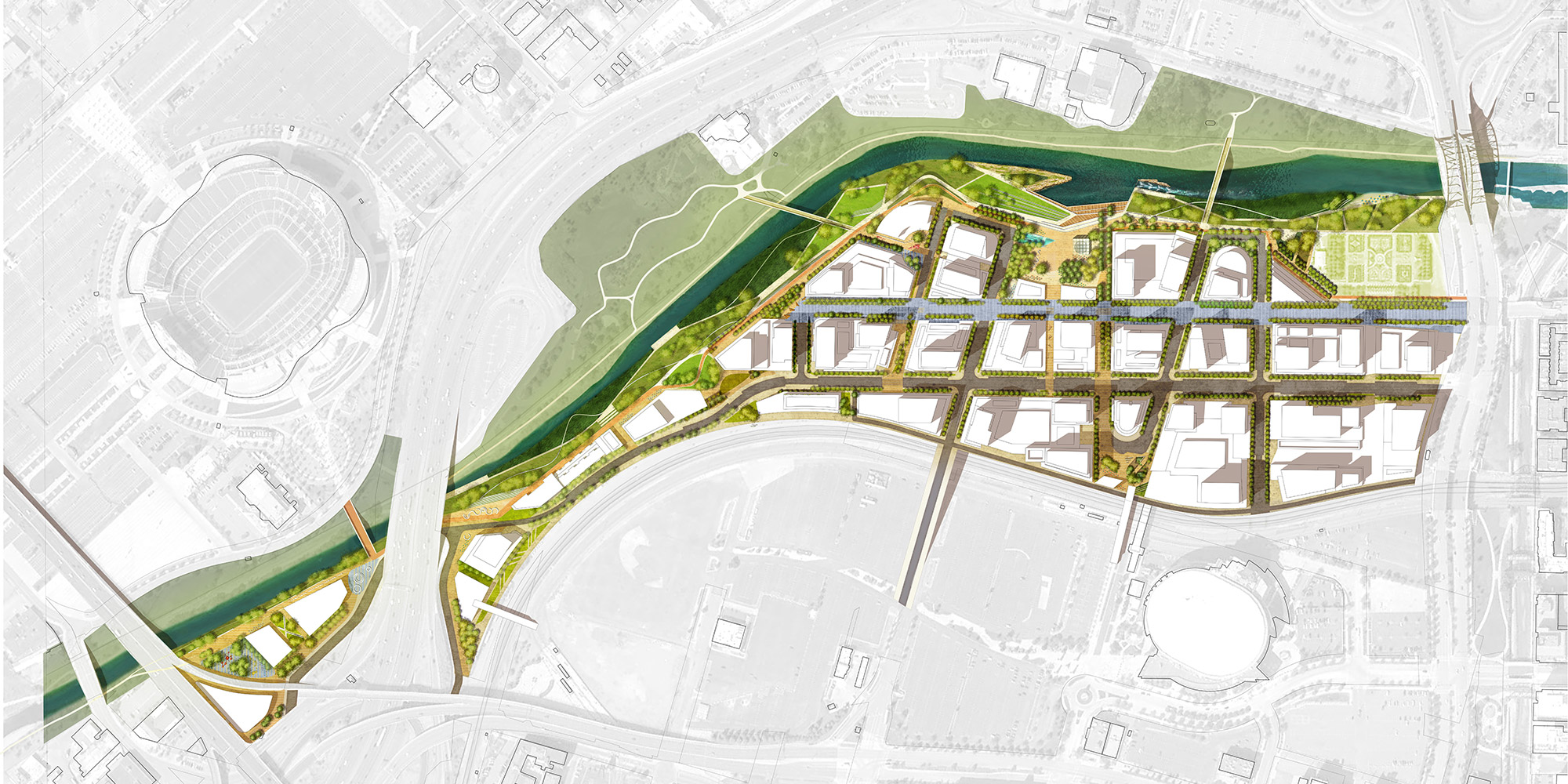 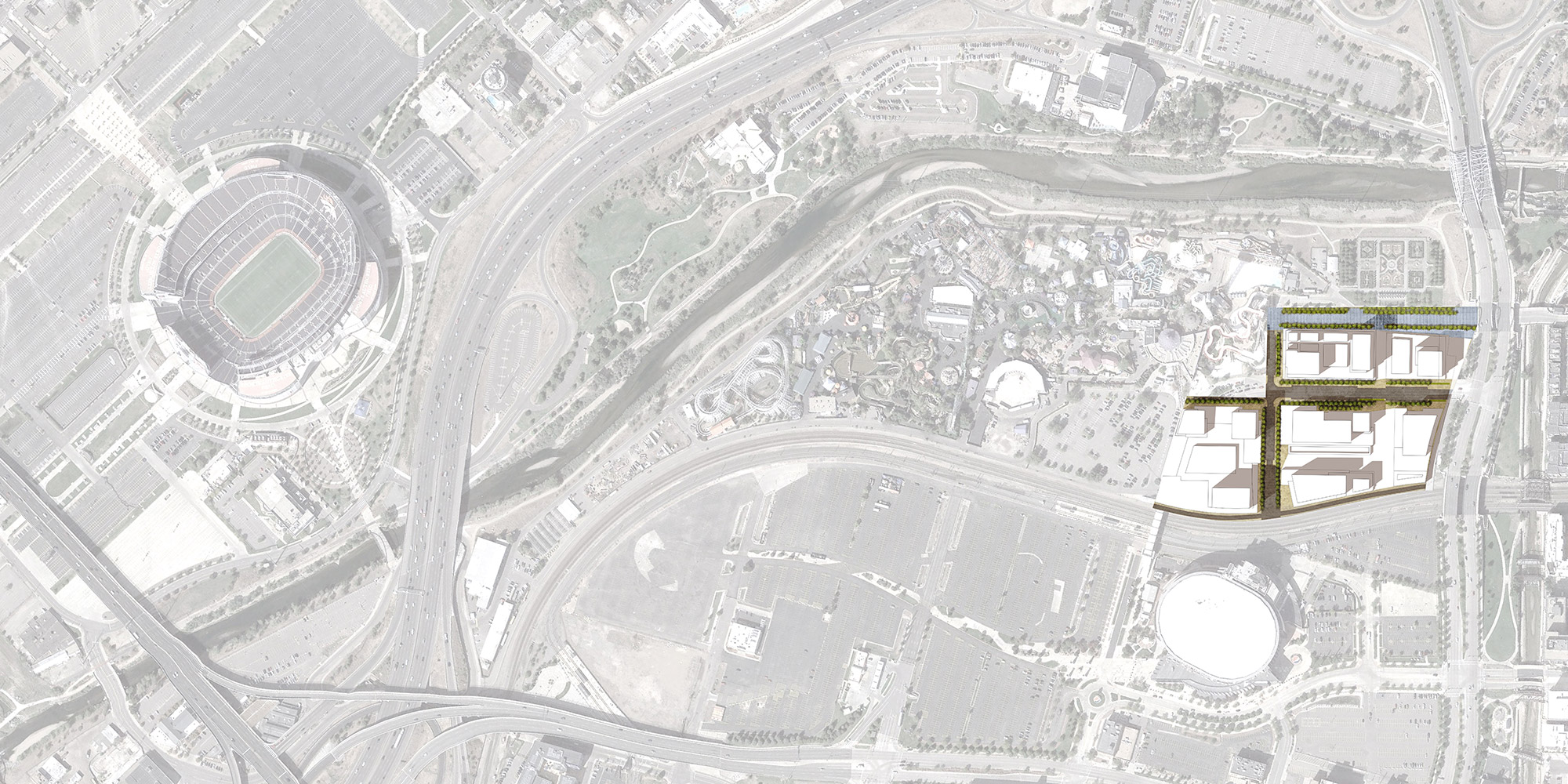 In this next concept rendering, we see a new public space adjacent to the Pepsi Center/Elitch Gardens light rail station, which is just out of view at the bottom of the image: 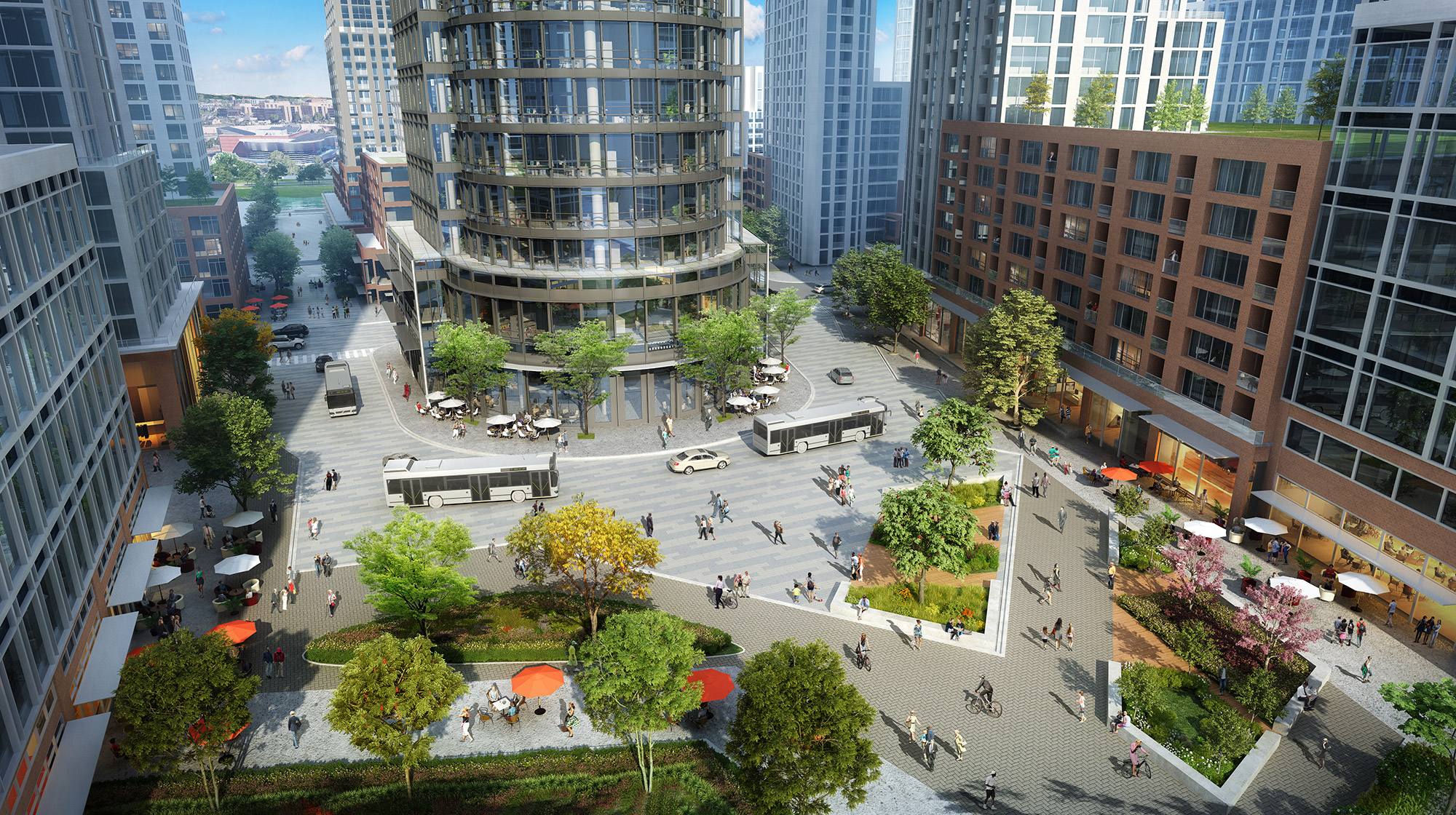 The signature public space in the River Mile would sit along the South Platte River and offer a grand urban plaza as well as numerous opportunities to directly engage with the river: 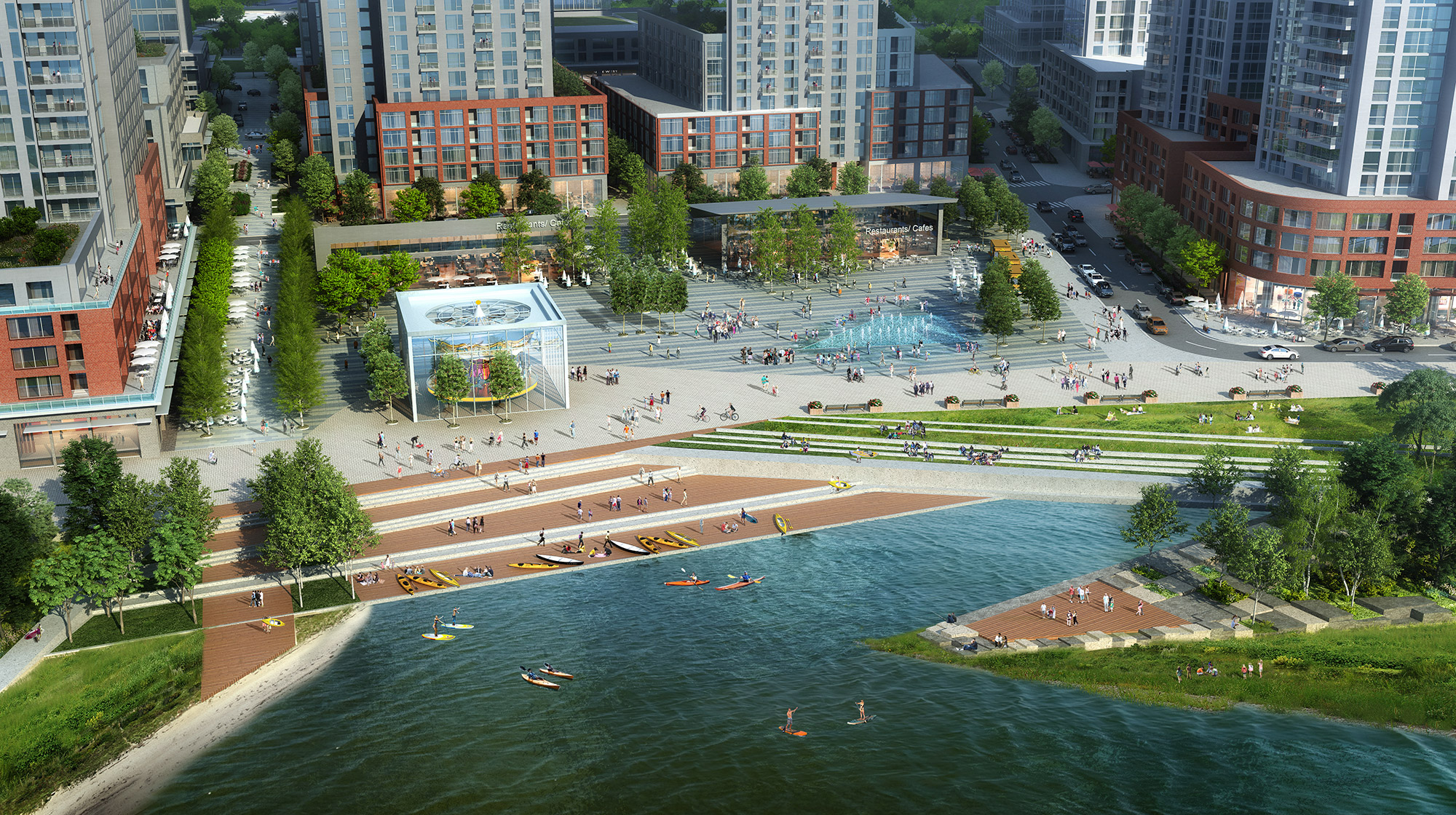 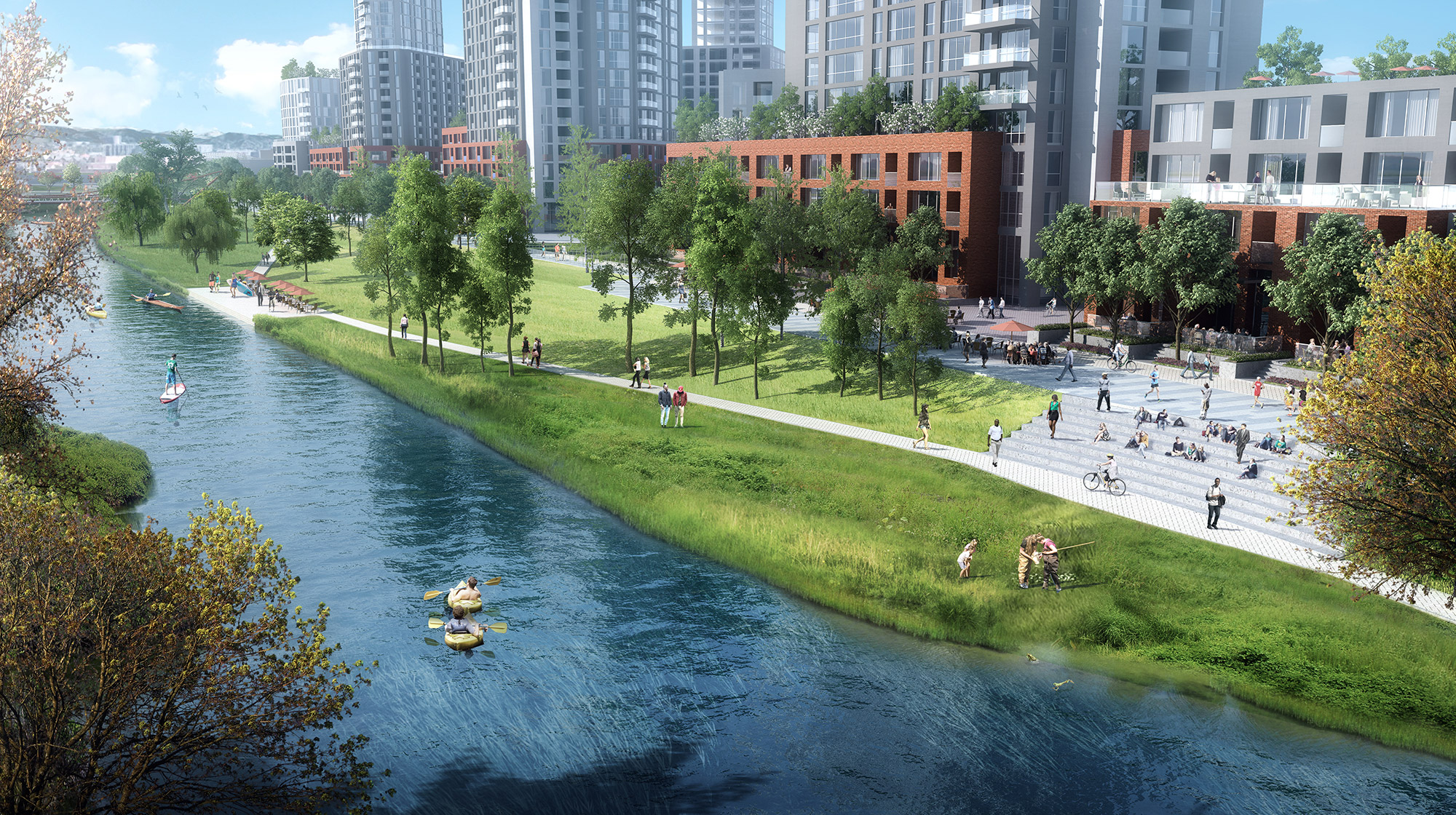 Development near the river would feature buildings with active ground-floor uses, separate bicycle and pedestrian paths, and natural landscapes: 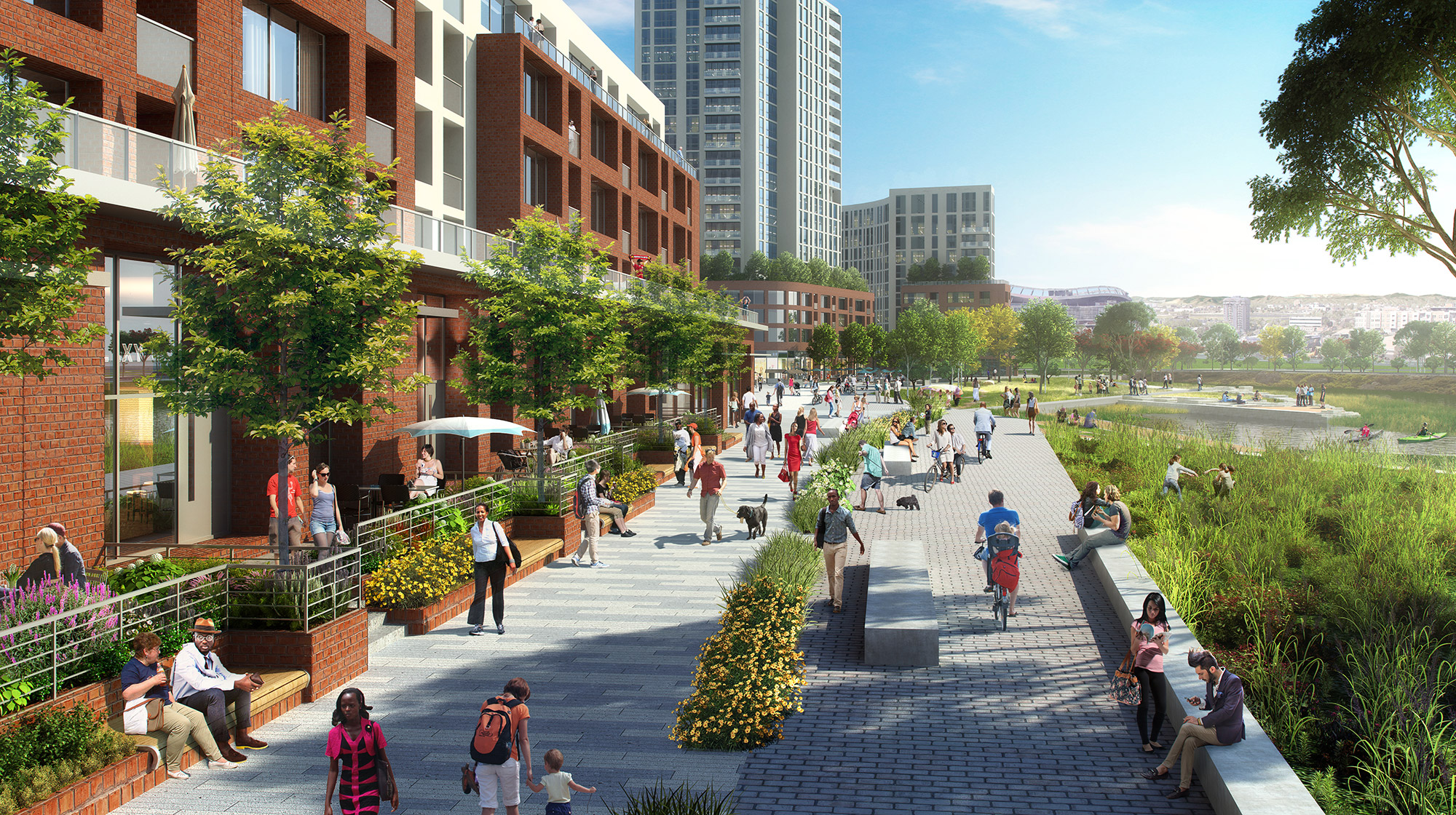 The River Mile’s public spaces would integrate with other amenities like community centers to create welcoming, inclusive places: 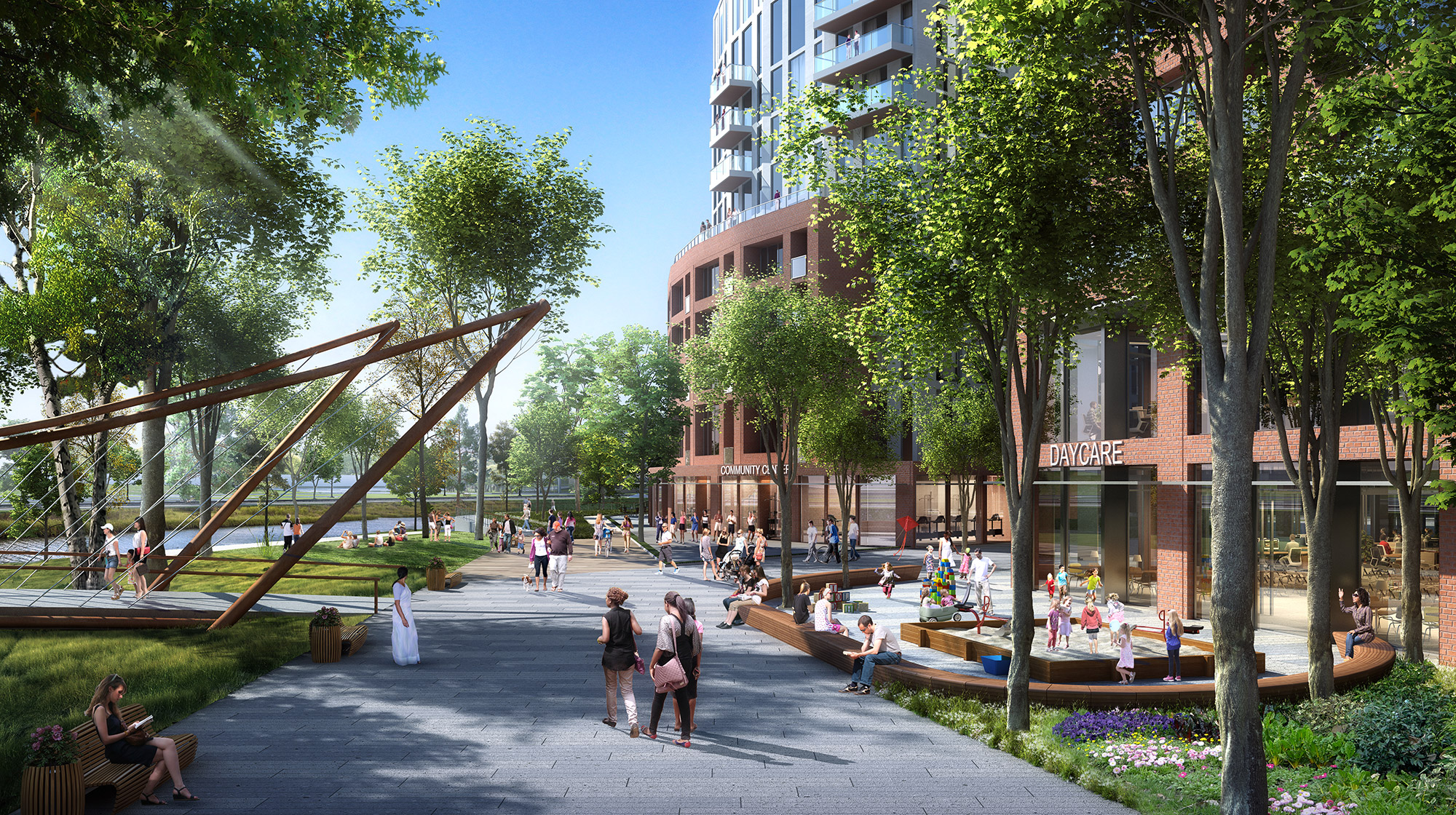 The River Mile is a long-term effort, but it is making good progress in these early stages. Let’s hope that continues! We will keep you posted as new milestones are reached in the evolution of downtown Denver’s next great neighborhood.

EDIT 10/29/2018
The date of Denver City Council’s public hearing and vote on the new zoning has been changed to Monday, December 17, 2018. This date has been updated in the post above.