You may have caught this about a week ago when it was announced, but just in case… the US Census Bureau released its last annual July population estimates before the 2010 Census and, once again, Denver led the state in population gain.

From 2006 to 2007, Denver squeaked past Douglas County by a little over 100 people to have the highest numeric population gain in the state for that year, with an increase of about 12,500. Then, from 2007 to 2008, Denver topped second-ranked Arapahoe County by almost 5,000, gaining over 15,500 people that year. The numbers just released for estimated county populations as of July 1, 2009 has Denver gaining over 17,000 for the year, with Adams County in second place at over 11,000.  The City and County of Denver’s population has now surpassed the 600,000 mark for the first time ever. 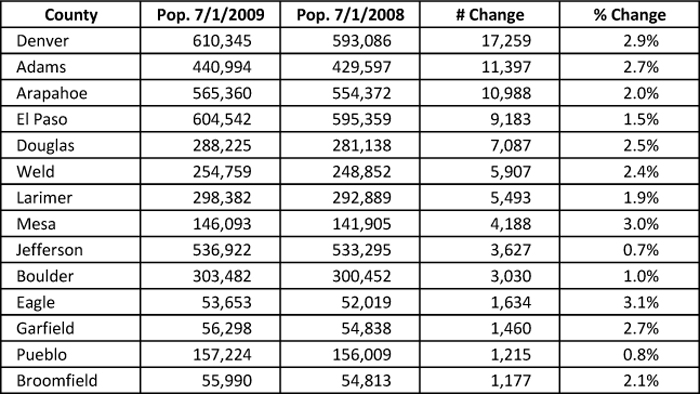 Of course, the point isn’t really the county vs. county aspect of this. At some point in the future, El Paso County (and other counties as well) will pass up Denver County in population given that Denver covers only 155 square miles (a third of which is DIA) and must rely on infill development for growth, while El Paso County, for example, covers 2,130 square miles and is only about 10% urbanized at present.  The point is that Denver is growing in a significant way after several decades of decline during the era of peak suburbanization. This tells us we are on the right track. People are voting with their feet (or perhaps, their house keys). Denver does have some undeveloped areas left (e.g. Stapleton, Green Valley Ranch, DIA/Gateway), but clearly the city’s long-term source of population growth is going to occur through infill development and the densification of its Areas of Change (former industrial areas, the greater Downtown area, transit-proximate areas, etc.). This is a good thing. Densification and urban infill is sustainable development at its most simple.