Recently I had the opportunity to travel to Vancouver, BC as part of the Downtown Denver Partnership‘s urban exploration program. Our group included about 60 downtown leaders and officials, and the purpose of the trip was to learn about different design and policy initiatives used successfully in Vancouver that we could potentially adopt to improve Downtown Denver.

Downtown Vancouver is an amazing place. A city and metro area almost identical in population to Denver, their downtown is covered by (literally) hundreds of residential towers, along with office towers, all the usual civic buildings and cultural amenities, exceptional parks, and substantial retail.  Over 90,000 people call Downtown Vancouver home in an area 1.75 miles by 1.0 miles—about the same size as in Denver bounded by the South Platte River to the State Capitol, and Speer Boulevard to Park Avenue. Here’s Downtown Vancouver via GoogleEarth with 3-D Buildings:

How Downtown Vancouver transformed over the course of about 20 years into a dense, residentially oriented and livable downtown was the result of a convergence of many factors, including worldwide exposure from hosting the 1986 World Expo; a flood of investment capital in advance of the 1999 transfer of Hong Kong to China (and, since then, investment capital from throughout the world); a strong pro-environmental and progressive cultural ethic; a vibrant local economy; anticipation over hosting the 2010 Winter Olympics; a geographically constrained urban core; and municipal leadership that’s unapologetically and aggressively pro-urban. Imagine a city Denver’s size with dozens of One Lincoln Parks and Glass Houses coming online every year for over two decades running (with no slowdown in sight). That’s Vancouver. 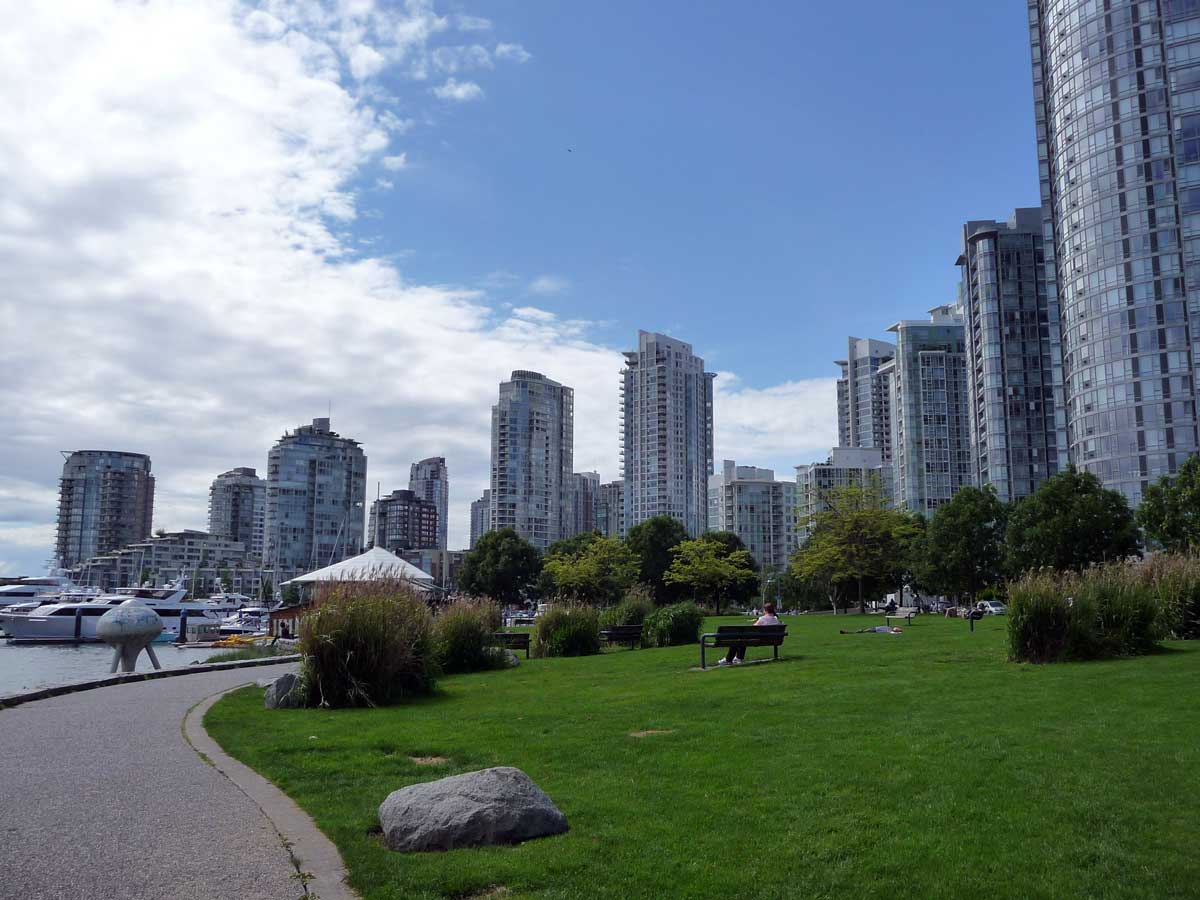 It’s impossible for me to recount the hundreds of great ideas, key decisions, and influential policies that we learned about on the trip in this blog post, but I’ll share with you a few that really stood out to me:

When asked about the city’s policy and spending priorities within the public realm, the Vancouver planning director said in a very matter-of-fact manner:

…in that order, period. And this is not just a planning department priority order, but one shared enthusiastically by Public Works, Parks & Rec, and everyone in the city from the Mayor on down. That priority order permeates everything they do in Vancouver, and it shows. It’s no coincidence that Vancouver routinely ranks as one of the most livable cities in not only North America, but the world. In Denver, we are slowly coming around to those priorities, but we have a long way to go before it becomes an institutionalized way of thinking. 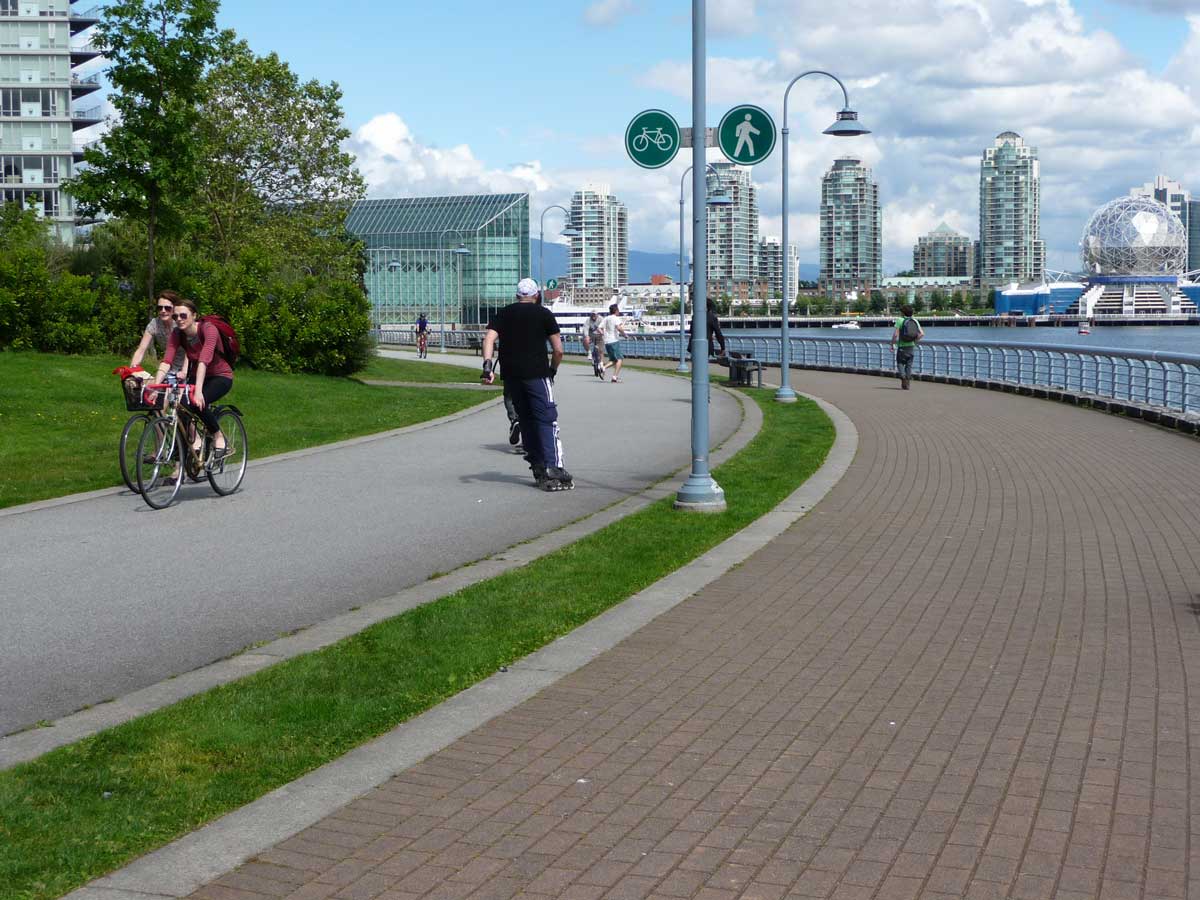 Vancouver requires a lot from their development community. Parks, plazas, promenades, civic projects, transit improvements, schools, day care centers… you name it, if it’s something that adds to the livability of the city, the city requires developers to help pay for these things (what they call the “common wealth”) if the developers are going to be granted a building permit. But in exchange for all of that civic investment, the city rewards the developers with substantial density bonuses and a streamlined review process. The city’s strategy is that a successful project must be a win-win for both the developer and the community. The city will work whatever deal is necessary to make the project profitable for the developer while also making sure the project contributes to the vitality of the city. Now, to be fair, this is a strategy that works because there is such a tremendous demand to build projects in Vancouver, that the city is in a position of calling the shots. But, one of the reasons why demand to invest in Vancouver is so strong is because of the high quality of life that has resulted from all those amenities that were built with help from the development community. 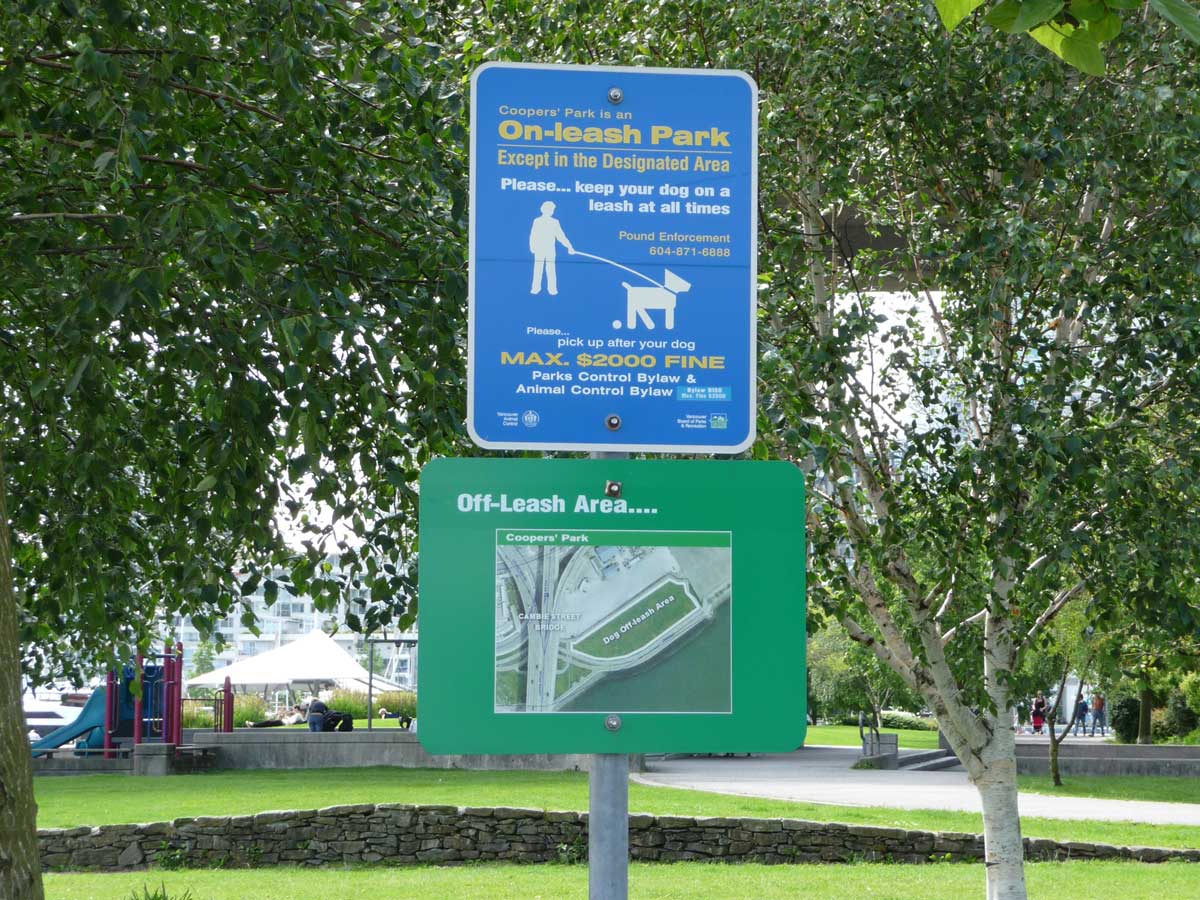 Vancouver is known for its “point” tower: a thin structure rising up from a podium base that extends to the property line. In Vancouver, each tower above the podium must be at least 80 feet from its neighbor. This results in a checkerboard-like distribution of towers across the downtown with plenty of air and sun and nice views in between while, at the sidewalk level, the podium provides a strong street wall punctuated only by the carefully placed public park or plaza. In Vancouver, those tower podiums are usually only two or three stories high and consist of various activities such as retail, lobby functions, offices, or community uses. Parking? It’s all underground. Above-ground structured parking is not allowed.

Towers in Vancouver are not allowed to have a flat boxy top. The developer/architect is required do something interesting at the top. The city doesn’t dictate what the top must look like and it doesn’t have to be fancy, it just can’t be a box. 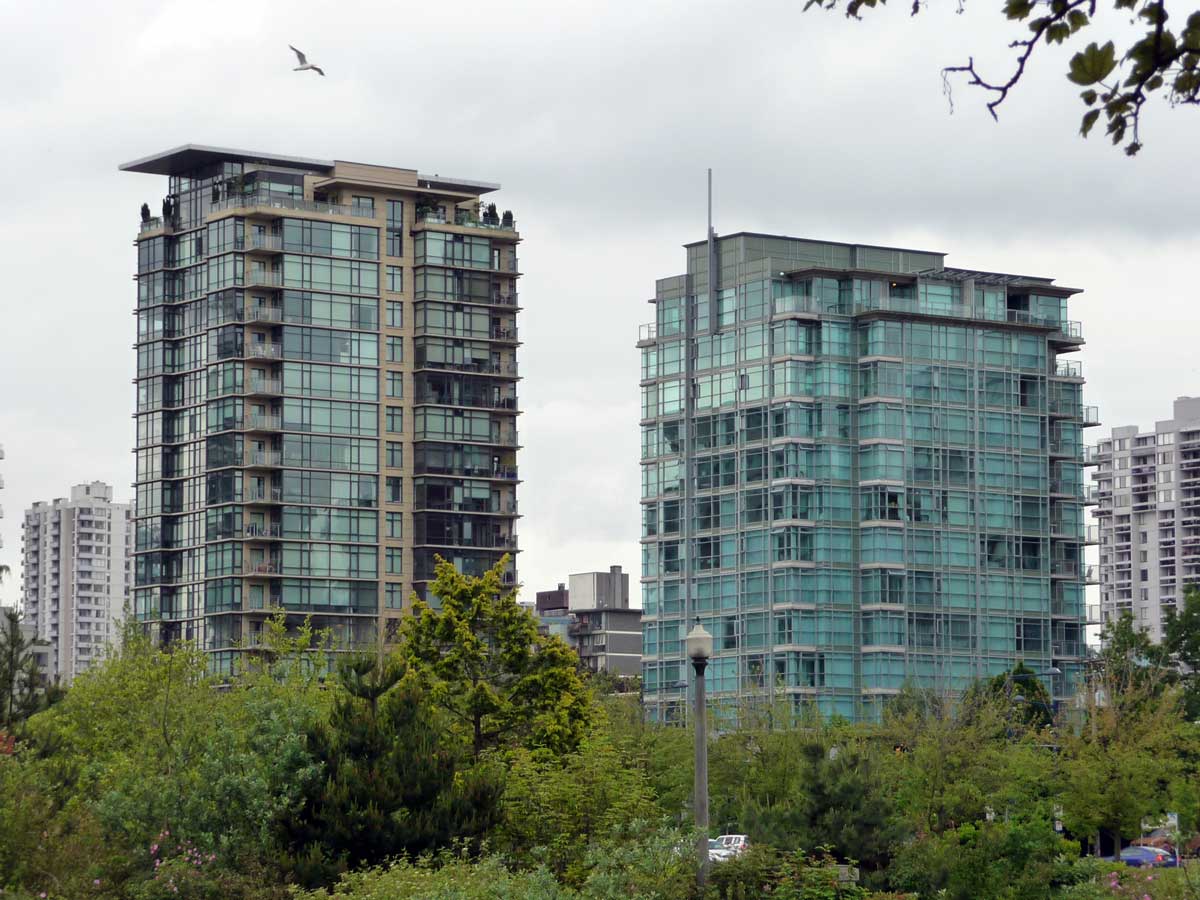 There are 14 full-service grocery stores in Downtown Vancouver (plus urban versions of Home Depot and many other big-box retailers). Want retail? Need lots of people. 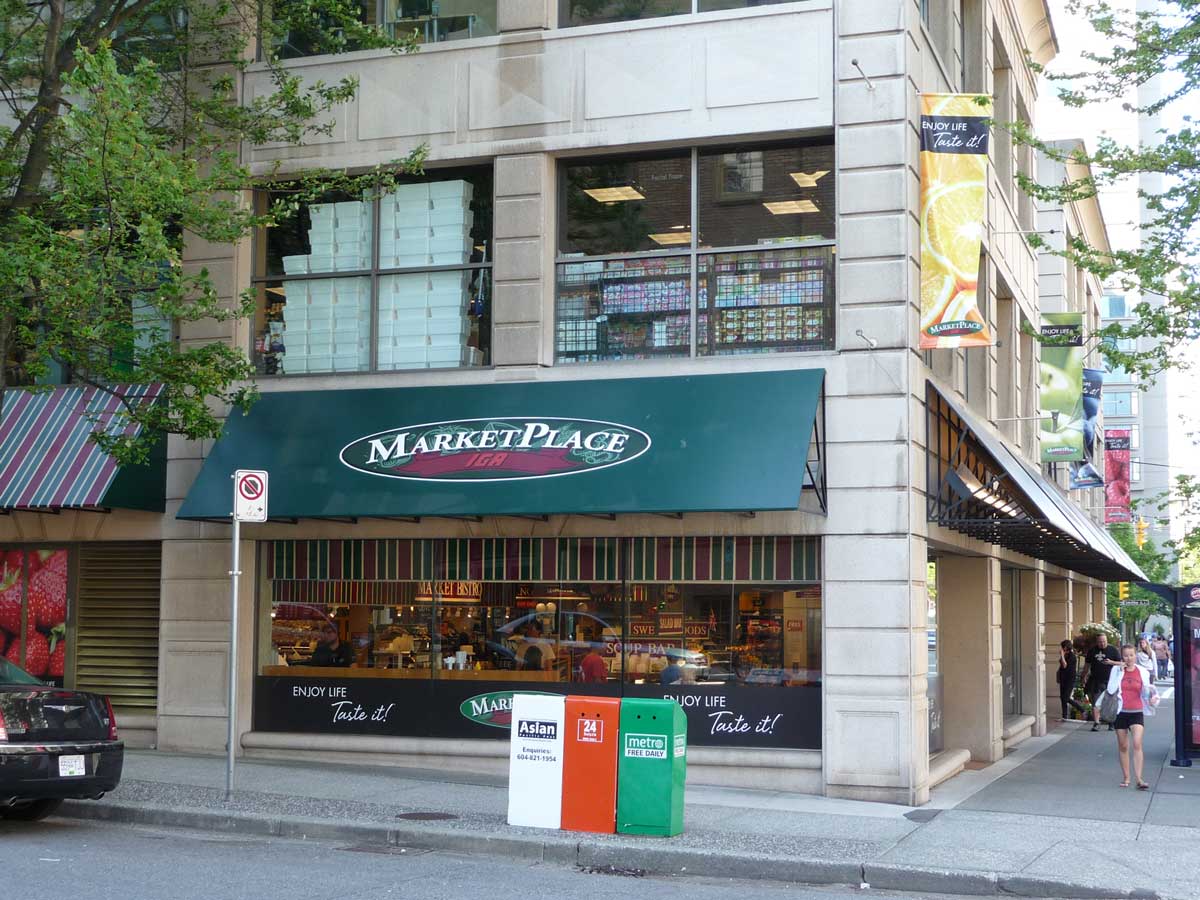 Vancouver is known for its family-friendly downtown. They made the decision that their downtown wasn’t going to be for just young professionals and empty-nesters. Not only do they have an affordable housing requirement (as does Denver), but they also have a family-housing requirement: each development must have a certain number or percentage of three- or four-bedroom units to accommodate families. That, combined with plenty of downtown schools, day care centers, and kid-friendly public spaces, has mostly eliminated the “gotta move to the suburbs after the kids are born” routine that is so typical here in Denver. In fact, the demographic that has been a big part of the city’s population growth has been suburbanites with kids moving into Downtown. 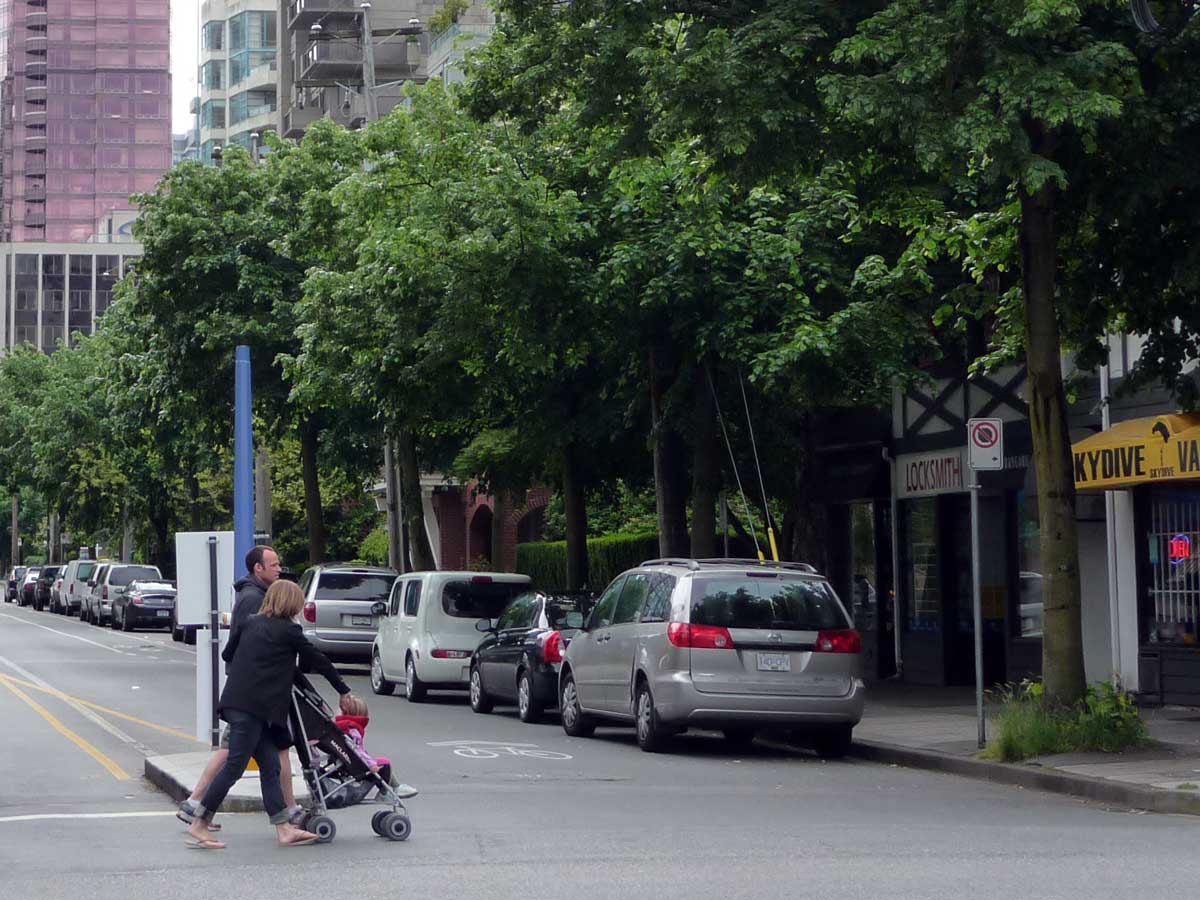 Ground-floor retail is required in buildings only along certain streets (primarily those with transit). Otherwise, the ground floors of buildings must be visually permeable with interesting/engaging designs to the pedestrian, nice landscaping, etc., but retail isn’t forced to be everywhere. 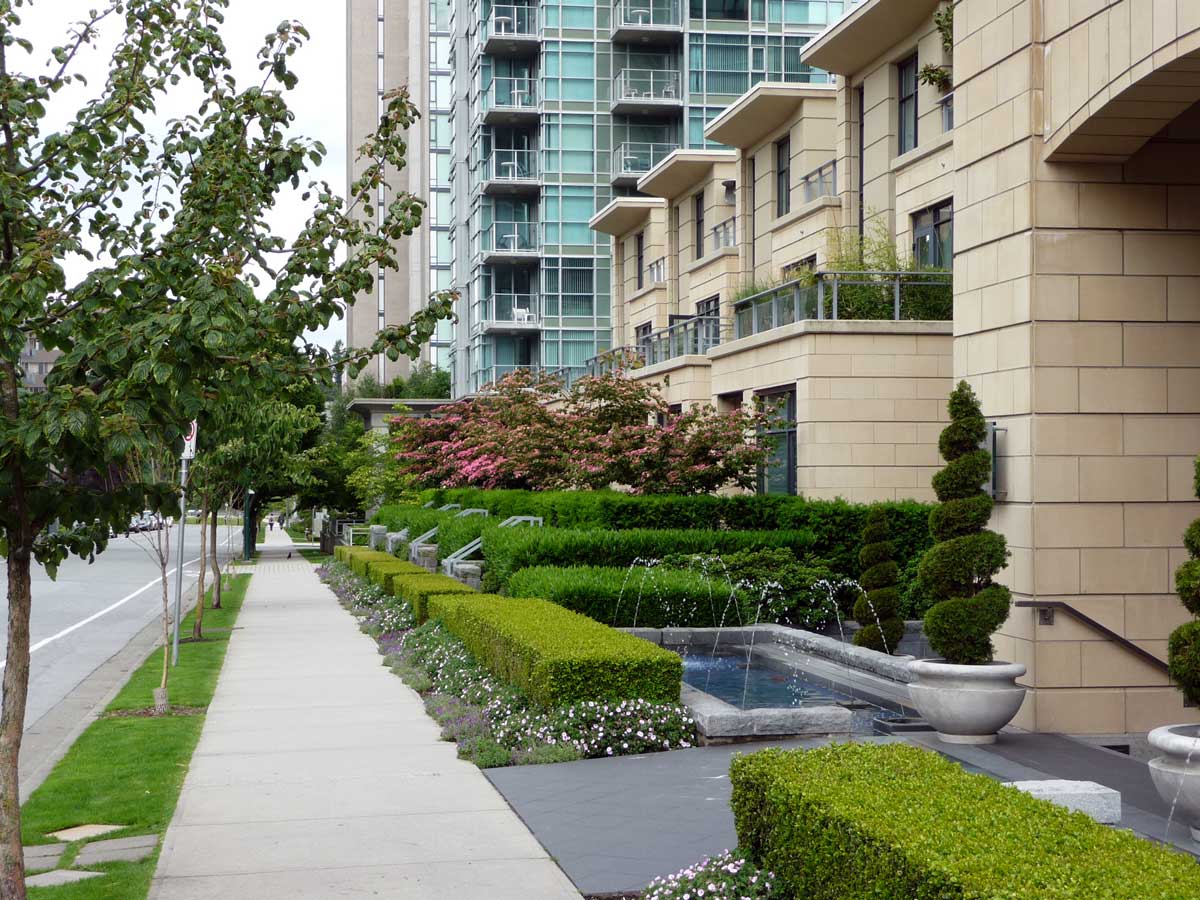 I could go on, but that’s enough for now. Each of these topics have clear applications for Denver. As a result of this trip, I’m even more committed to advocating for more progressive thinking about how Downtown Denver should grow and prosper. Vancouver’s experience can help us get there.