If you happen to take a walk between Sloans Lake Park and Federal Boulevard, you’re going to see and hear a ton of construction going on. I’ve previously reported on three projects in the area, but thought I’d give you a mini tour of everything that’s going on in the neighborhood while updating you on those three projects. First the map: 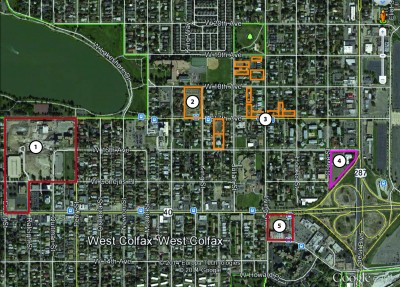 All of the parcels I’ve highlighted here are in some state of construction. The parcels outlined in red are mixed use developments that are underway: The St Anthony’s Hospital Redevelopment (#1) and Mile-High Vista (#5). The orange parcels are all townhome developments; thirteen projects averaging 6-8 units with. I’ll update you on the Framework project (#2) that I wrote about in an earlier post and show some pictures of the radical changes happening on 17th Ave (#3). Finally, there’s a bit of an unknown, the site at Federal and 16th avenue (#4) has recently been scraped in preparation for sale.

There currently isn’t much in the way of building happening at the old hospital site, but there’s a lot of behind-the-scenes preparation going on. All the buildings that are to be taken down have been demolished (minus an old maintenance building on 17th Avenue being used for a construction office) and the site is currently being regraded. Cameron Bertram of EFG, the owner’s representative, says that by mid-summer we should see utility work well underway and by fall the new city streets will be put in place. EFG currently has four of seven blocks under contract and is nearly ready to close on another. The Kuhlman Block Alliance will be developing the northeastern-most corner with a boutique hotel in the existing Kuhlman Building, restaurants, retail and apartments. Trammell Crow Residential will be developing two interior blocks with nearly 370 apartments. Finally, Littleton Capital Partners will be developing a retail anchor on the southern-most block facing Colfax. This block will contain a renovated 4-story office building, a retail pad, and a 12-screen Alamo Drafthouse Cinema as the anchor tenant. Here’s a rendering of the cinema block from Colfax and Raleigh Street taken from EFG’s website www.sloansdenver.com. 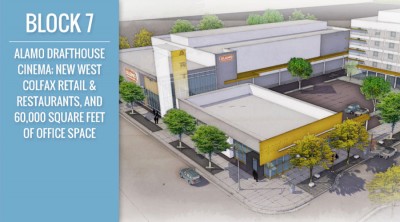 Over at Framework, there is much work underway. The first phase is mostly framed and the developer has informed me that he will be breaking ground the second phase very soon as the first phase is already completely pre-sold. Here’s a shot of the first building (along 18th avenue). 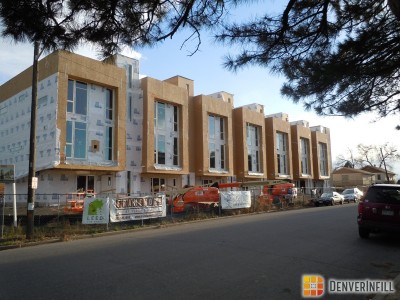 The three-story buildings are strikingly noticeable among the primarily 1- and 2-story single family homes in the area, and given their location at the top of a small hill, can be seen rising up from the neighborhood from Sloans Lake Park two blocks away. This project was the first townhome development in the area, and has since spawned a flurry of construction on neighboring blocks; thirteen townhome projects are now underway in the immediate vicinity.

A radical change is occurring on the north side of 17th Avenue where five adjacent lots are in varying stages of construction by five different developers. What was once a 1- and 2-story single family street is rapidly getting an urban makeover. 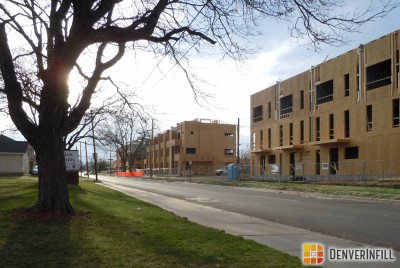 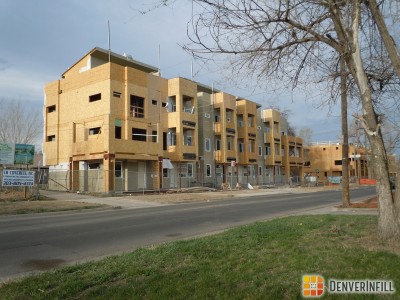 On the triangular site overlooking the Federal Boulevard/Colfax interchange once stood a small institutional building. Recently, the owner scraped the building in order to better sell the property. The remainder of this 2+ acre site is covered with an asphalt parking lot, with spectacular views of Mile High Stadium, Downtown and Southeast Denver (not that the asphalt cares much). I personally hope someone snatched up this gem of a property and turns it into something worthy of this extremely prominent site. Here’s a panorama of the site taken from Grove Street.

Last, but not least, is the Mile High Vista Project.  As you can see in the pictures below, the 7 story workforce housing component of the development has topped out and is being skinned and finished. Five stories of housing sit atop a two story podium of parking, resident amenities, and office space. The building is slated to receive a LEED Platinum rating, which is highly commendable for an affordable housing project. 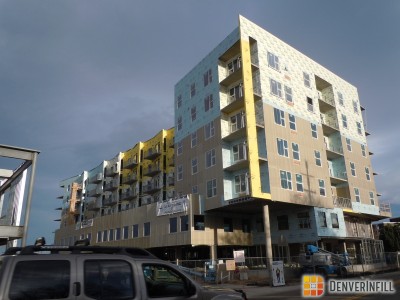 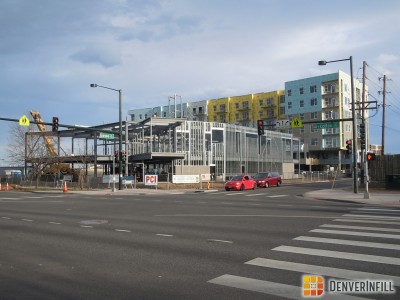 In front of the apartment building (anchoring the corner of Colfax and Irving) is a two-story steel frame building that is to become a brand new 25,000 sq.ft. Denver Public Library branch. Construction of the branch had been delayed for some time due to some soil issues, but after a redesign of the foundation they are now making significant progress and hope to open next year.

I hope you enjoyed this little tour of the neighborhood; as you can see, it’s rife with construction activity, redevelopment and densification. Check it out and stay tuned.