I’ve just returned from a week of visiting family out of town, and one of those trips took me to Michigan, where I once again had the opportunity to drive through Detroit.

In the 1950 census, the city of Detroit’s population peaked at 1,849,568. In 2000, the city’s population was 951,270, and SEMCOG, metro Detroit’s equivalent to Denver’s DRCOG, estimates Detroit’s 2008 population at 860,521. Physically, what happens to a city when it loses half its population in 50 years? The answer is visible from driving along Interstate 94 as it cuts through the heart of the city, where one can see hundreds of vacant or burned-out buildings overlooking the sunken freeway. But to really appreciate the degree to which many of central Detroit’s neighborhoods have been abandoned, explore the city using GoogleEarth. First, find Downtown Detroit along the Detroit River, then venture northwest, north, and northeast from there, and you will be shocked at what you see: 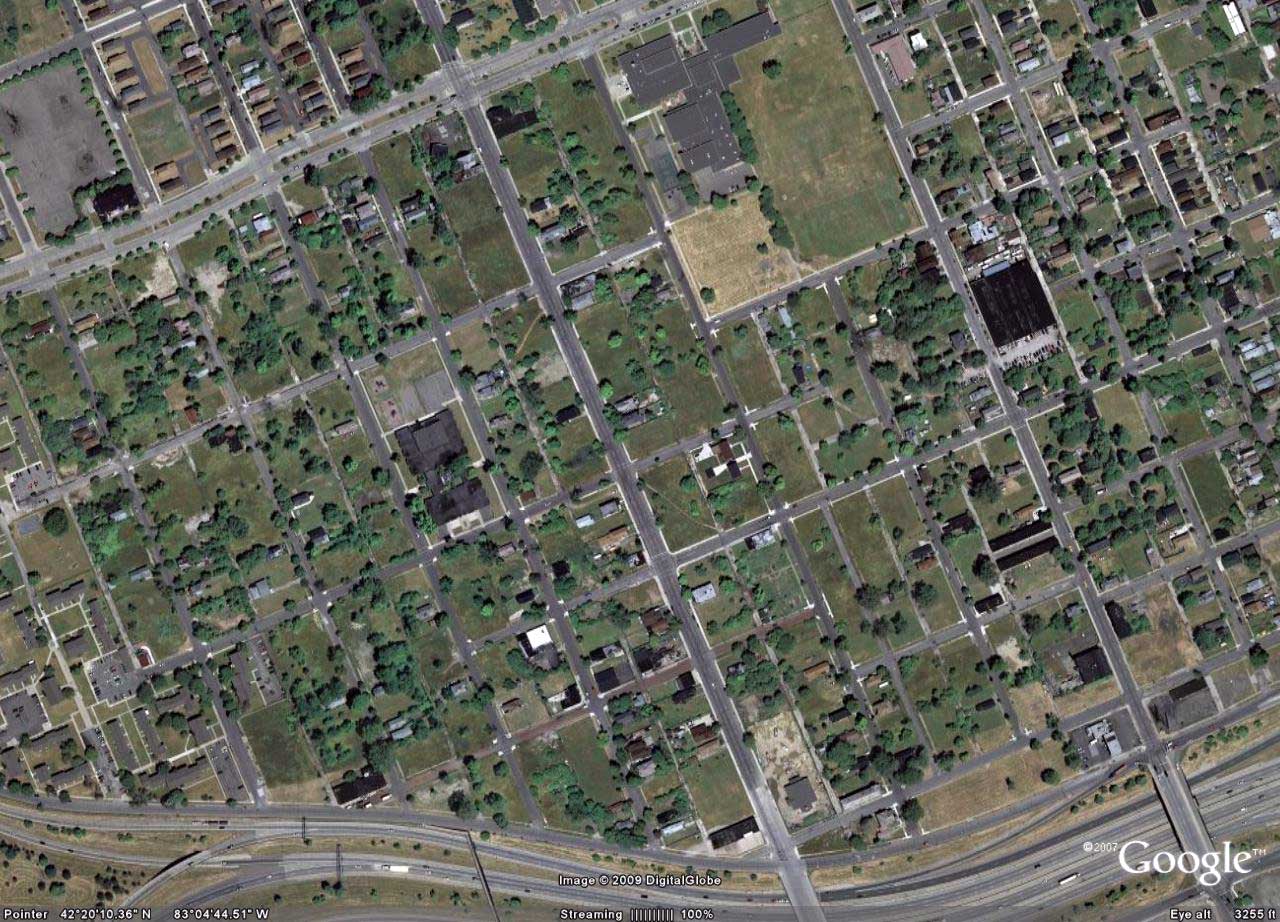 Talk about infill opportunities! These images represent just a few examples of the extent of urban abandonment in Detroit. It’s surreal to see block after block of a city grid with virtually no homes or buildings lining the streets. Between 1970 and 2000, over 161,000 homes and buildings were demolished in the city of Detroit, with thousands more razed every year. Nature is reclaiming many of these empty blocks, with native grasses and trees thriving and turning these once-dense inner-city neighborhoods back into greenfields. One Detroit city councilperson even suggested that the city should relocate any remaining residents from these abandoned neighborhoods, fence the areas off, and let them transform into nature preserves.

To give you an idea of the expanse of these empty inner-city Detroit neighborhoods, here are three aerial images from Denver taken at the same scale (eye altitude). From left to right: the West Highlands neighborhood centered on 32nd & Lowell, the West Washington Park neighborhood, and Capitol Hill west of Cheesman Park. Can you imagine these Denver neighborhoods being virtually empty of buildings or people?

For an in-depth look at Detroit’s sad situation, check out this article, Disappeared Detroit, from Lost magazine.

My purpose in discussing Detroit is not to compare that city to Denver, but to emphasize, using Detroit as an example, the importance in being vigilant in maintaining the vitality and quality of our urban core. I’m sure no one in Detroit in the early 20th century during the peak of that city’s wealth and prominence could have believed that Detroit could decline in a free-fall so far, so fast. Such is the case in Denver today, as we mostly dodged the bullet of severe urban decay that struck so many other cities in the 1970s and 1980s and now find ourselves twenty years into an era of great revitalization and investment in our urban center. We cannot rest on our laurels and assume that Denver will forever remain the thriving heart of a sprawling metropolis. Every day, we must work hard to make sure that what happened to Detroit never happens to Denver. That is one of the reasons why I created DenverInfill.

We are blessed here in Denver to have such a solid fabric of stable, historic urban neighborhoods: Capitol Hill, Highlands, Sloans Lake, Washington Park, Park Hill, Berkeley, Baker, Hilltop, Bonnie Brae, Cherry Creek… just to name a few. Can you imagine Denver without them? I hope everyone reading this finds some way to help keep Denver the vibrant, beautiful city that it is.