Happy 2010 everyone! The time to reflect upon planning and development issues in Downtown Denver from the past year has arrived again. For a trip further back down memory lane, check out the retrospectives for 2008, 2007, 2006 and 2005.

It is no secret that 2009 was the year we experienced the full brunt of the 2008 economic meltdown. Proposed real estate developments all over the city, state, and country were cancelled (or, more optimistically, “temporarily postponed”). Projects of all types were cancelled because developers realized they had little hope of securing financing for their projects from banks or other lenders. Office projects were cancelled because job losses and corporate bankruptcies reduced the demand for office space. Residential projects were cancelled because people couldn’t find buyers for their existing homes to allow them to purchase new homes. Even in a booming market, perhaps half of all proposed real estate developments fail to get off the drawing board. In 2009, that statistic was closer to 100%. Usually in my retrospectives I list the projects for the year that were cancelled or that failed to get under construction. I’ll spare you the list this year, but let’s just say it is long.

Now the good news! Across the board, economists and real estate experts agree that Denver is at or near the top of the list of US cities that have generally survived the Great Recession with the least amount of damage, and that Denver is well positioned to lead the way into the recovery. The only question that no one really knows the answer to is: will the good times return in 2010? 2011? 2016?

I moved to Denver in 1985, the year of the infamous “oil bust” that tanked the local real estate market—sort of the 2008 of its time. The warning signs were there in 1984 (just like in 2007) and 1986 saw the completion of the last of the big Downtown projects that were too far along to cancel (just like in 2009). Back then, however, it took another four years before we started to see the first substantial upticks in the economy and another five years after that before we started to see significant new construction in the Downtown area. Since history tends to repeat itself, does that mean we will have to wait until 2014 before things start to improve and 2019 before new construction projects dot the Downtown landscape once again?

My guess: probably not. From my perspective, there are four important differences between the bust of the late 1980s and today.

First, the ’80s recession hit Denver in particular very hard. People here lost a third to half of their property values. By comparison, this time around we’ve experienced only a relatively minor dip in property values.

Second, Denver in the 1980s was over-reliant on a few industries (like oil) that, if suffering, caused Denver to suffer as well. Today, Denver’s economy is more diversified and we can look to many different business sectors to help us recover.

Third, in the early 1980s, Denver substantially overbuilt, particularly in the office market. Denver’s tallest building, Republic Plaza, completed in 1984, alone contains more office square footage than 1900 16th Street, 1400 Wewatta, 1515 Wynkoop, 1755 Blake, and SugarCube combined, and Republic Plaza was just one of about twenty-five office towers built in Downtown from 1980 to 1985. No wonder it took us over twenty years to see any new office construction Downtown.

Finally, in the 1980s, Denver and other big cities across the country were in their third consecutive decade of decline. Suburbanization was rampant, Denver was losing population and its infrastructure was in disrepair, and Downtown Denver had regressed from the vibrant mixed-use heart of the city into an overgrown office park that shut down at 6 PM.

Today, the trend is exactly the opposite. Urban centers across the country are in high demand and viewed as the future of sustainable development. Denver’s population is growing and we’ve invested billions of dollars in civic facilities and infrastructure that have helped transform Downtown Denver back into the thriving hub of the city and region.

For all these reasons, I believe we are poised for a shorter transition period than before; although, I think we’re still looking at another two years before private-sector development will resume to any significant degree. Of course, forces beyond Denver’s control such as war and terrorism, additional financial crises, or the pending Apocalypse of 2012 could delay the recovery. Let’s hope not.

Despite all the doom and gloom, there were a number of positive developments in Downtown Denver this past year. The Four Seasons, Spire, and 1800 Larimer projects topped off in 2009, altering our skyline that had remained largely unchanged for a generation, and projects like 1515 Wynkoop opened their doors and enhanced Downtown’s vibrancy and urban fabric. Throughout Downtown and its adjacent districts were a number of other infill projects that continued with construction or neared completion in 2009, such as the Embassy Suites project in Central Downtown, the Alexan project in Prospect, the Park Avenue Lofts and DHA’s Park Avenue Hope VI redevelopment in Uptown, the Cornerstone project in Curtis Park, Frontview 40 in Jefferson Park, and a smattering of smaller projects in Highland, Ballpark, City Park West, and elsewhere. A few new projects even managed to break ground in 2009, like Solera at 20th and Lawrence. 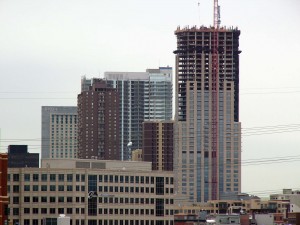 LoDo was all abuzz at the start of 2009 regarding Buzz Geller’s proposed Bell Tower project and the controversy over its height and perceived “thinness”. After a few ups and downs, the project received a final approval from the Landmark Preservation Commission in March. Now it is up to Mr. Geller (and the strength of the multi-million dollar condo market) as to when the project may become a reality.

Building renovations continued to be an important component of Downtown’s revitalization in 2009. 1800 Glenarm and Larimer Corporate Plaza, two frumpy-looking office buildings in need of a makeover, were successfully modernized this past year and are now looking great. There were a couple of historic renovations in Lower Downtown this past year as well. The Wazee Exchange Building restoration at 19th and Wazee is pretty much complete, while the Colorado Saddlery Building is just starting its restoration and conversion into a mixed-use development that will make the corner of 15th and Wynkoop one of LoDo’s finest when complete.

On the public sector side, Downtown development remained strong in 2009. The Denver Justice Center made steady progress throughout the year and is on pace for a 2010 opening. The state government launched construction of its new Colorado History Center in 2009 and work will begin later in 2010 on the state’s new Colorado Justice Center. Better Denver Bond projects like the Denver Police Department Crime Lab and the reconstruction of Boettcher Concert Hall should begin in 2010, along with several streetscape projects and the redo of 14th Street. The Auraria campus had a good 2009 with the construction of its new Science Building and design work continuing on two other proposed buildings.

And then there’s the big Union Station redevelopment. Despite the incredible complexity of the project, pressure from all sides to alter this or change that to the project’s design, and a several hundred million dollar funding gap, project planners persevered in 2009 and, assuming they close on their federal government loans as planned in a few days, construction of the massive project will begin this winter. For much of 2010, there’ll be one heckuva big hole in the ground as excavation takes place for the below-grade bus terminal, and in Fall 2010 the new light rail station should open. We may also see construction of the north “wing building” at 16th and Wynkoop get underway in 2010 as well. As projects go, the half-billion-dollar Union Station transit job will be big and messy and will take several years to complete—great entertainment for us construction junkies.

On the planning front, notable progress was made in 2009. The Downtown Pedestrian Priority Zone project (an action item from the Downtown Area Plan) and the Denver Living Streets initiative were success stories in 2009 that will shape how we perceive, design, and use our public rights-of-way from now on. In 2010, the big event of the year will be City Council’s adoption of the new Denver Zoning Code. A massive undertaking that has taken over four years to complete, the new code will finally align the city’s zoning regulations with Blueprint Denver to direct where and how Denver grows while preserving the character of the places in the city we treasure. The new zoning code isn’t perfect and undoubtedly there will be tweaks made to the map and code language as we learn through implementation which adjustments are necessary. But in my opinion, the new zoning code on Day 1 after adoption will be substantially better than the incoherent mess of a zoning code we have now.

For DenverInfill, 2009 was a good year as I finally converted the blog to WordPress and reoriented it for 2010 to include contributing bloggers and taking on urbanism in general throughout the Denver area as the blog’s focus. I hope you will stick with me in 2010 and stay engaged by adding your comments to the discussion, reposting and linking to DenverInfill from other online resources, and encouraging your friends to check out the blog and join the effort to improve our great city.

In conclusion, 2009 was definitely a challenging year. But Denver always survives these low points in the economy and comes out in the end a better, stronger, city—in part, because we take the opportunity during those difficult times to make great plans and invest heavily in our public infrastructure to prepare for (and facilitate) the next boom. In that light, 2010 should be a great year.