Ever since we retired the original DenverInfill website at the end of 2009, we’ve had plans to introduce a new type of project map that is interactive and easy to update. Thanks to the newest member of our DenverInfill team, Zach Pearson, that day has arrived! Zach put the map together using Google’s new Maps Engine Lite tool, and he’ll take the lead on updating the map on a regular basis.

Here’s a few things you should know about the new DenverInfill Project Map:

To get to the map, click on the Project Map image on the right sidebar. The map will open in a new window.

A project won’t be placed on the map unless there has been at least one post about the project on the DenverInfill Blog.

The infill developments have been grouped into three project type categories: Residential (Yellow), Office (Orange) and a combined category of Hotel (Red) and Other (Blue). The Other category includes civic and community uses like government buildings, museums, schools, hospitals, etc. You can toggle the three categories on or off using the check boxes next to the category headers in the legend. Circle, square, and star symbols are used to represent a project’s status (proposed, under construction, or completed).

When you click on a colored project symbol on the map, a pop-up box will appear giving you a link back to the Blog that retrieves all of the posts about that project. Please be aware, however, that the posts retrieved may include posts about other developments but which happen to mention the project in question.

When you click on a project name in the legend on the left, a pop-up box highlighting the project’s location will appear on the map.

Use the +/- buttons in the lower right corner of the map to zoom in and out in altitude. When you zoom close enough, the aerial photo switches to a bird’s-eye perspective image.

You can change the map background! The default background is the aerial photo, but there are eight other map backgrounds you can select. Just click on the little down arrow to the right of the Base Map header at the very bottom of the legend, and an options box will open. Below is a screen-shot of where that’s located: 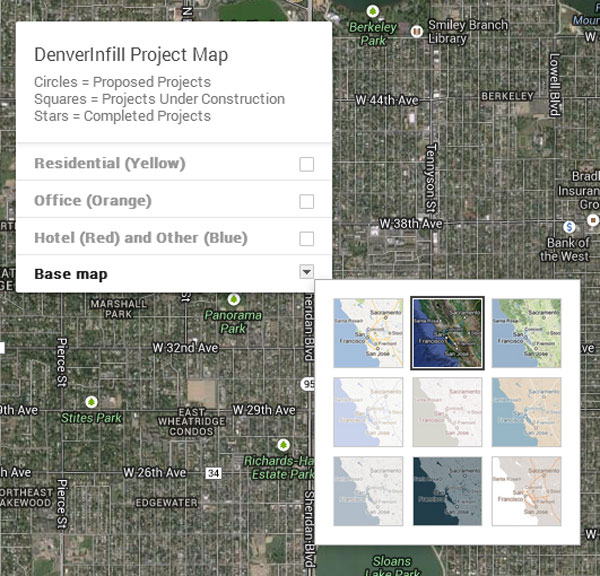 If you spot a project that has changed status or any map corrections in general, please let us know. Just post a comment with the updated information to any blog post about the project, and we’ll update the map.

We hope you enjoy keeping track of all the great urban infill developments in Denver on the DenverInfill Project Map!