Like many large, complex, redevelopment and infrastructure projects, certain elements are completed before others, providing opportunities to celebrate more than one grand opening. This is the case with Denver’s Union Station project.

Construction began in early 2010. Here’s a photo from our Denver Union Station Update #1 on March 22, 2010, when excavation was just getting started (seems like ages ago, doesn’t it?): 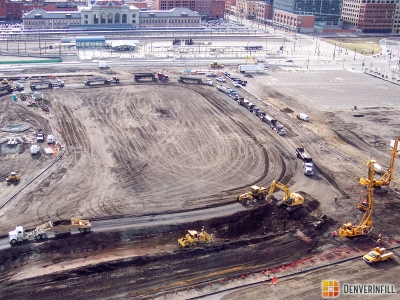 A year and a half later, the new (relocated) Union Station Light Rail Station was the first major component of the half-billion dollar project to be finished, resulting in Union Station’s first grand opening celebration on August 15, 2011. That was followed by 32 additional months of construction after which the project’s two largest transit components, the 22-gate underground Union Station Bus Concourse and the 8-track Union Station Commuter Rail Station opened on May 9, 2014, which we covered here at DenverInfill with six very special grand opening posts and three bonus posts at DenverUrbanism. In the interim, there was also the first Amtrak train to arrive into the new Commuter Rail Station in March 2014. Then, there was the “soft” opening of the historic station on June 12, 2014, with the Crawford Hotel and a few of the station’s new restaurant and retail spaces welcoming their first customers.

But now, the time has finally arrived for the grand finale of Union Station’s grand opening events! This SATURDAY, JULY 26, 2014, is the public’s chance to celebrate the completion of the whole project, with tours of the restored historic station and a major party—food, drink, music and entertainment—on the new (and quite fabulous!) Wynkoop Plaza. The party begins at 10 AM, the official ceremony is at NOON, and the festivities run through 3 PM. Here’s a link to the official Union Station grand opening page. PLEASE NOTE, if you want to take a tour of the historic station, you must have a ticket. Use this link which can also be found at the bottom of the official event page to reserve your tour tickets. Again, the final Union Station grand opening event is:

DenverInfill will be there to photograph the festivities so, if you can’t make it, look for a special Union Station Grand Opening blog post soon after Saturday’s party!