It’s that time of year again! Let’s take a look back at 2012 and reflect upon our accomplishments during the year in making Denver’s urban core the best it can be. For our previous retrospectives, use the link under the Pages section on the right side bar.

The big story in 2012 had to be the magnitude of the multifamily residential construction boom that developed during the year in the Downtown area. I recently posted an extensive overview of this issue in late November, so I won’t repeat all those details here. But the bottom line is that there are over 3,700 residential units within the greater Downtown Denver area under construction right now—and that is profound for two reasons:

First, it was only two years ago in my 2010 Retrospective that I wrote, “Well, what can I say that everyone doesn’t already know: the economy tanked, the boom is over, and we’re in a period of ‘transition’ (that’s a nice way of saying there’s not going to be a lot of private-sector real estate development in the next few years).” Then, just one year later in my 2011 Retrospective, I observed, “We’re on the cusp of a MAJOR housing boom in central Denver… I’ll wait until our 2012 Retrospective to say that the ‘Boom is Back,’ but this is a heads-up that it may be.”

The intensity with which private-sector investment in central Denver came roaring back in 2012 was amazing. Strong population growth and the lowest apartment rental vacancy rates in a decade will do that for you. But this current residential boom is more than just a function of market supply and demand. It’s reflective of something much bigger, which brings me to the second reason why this construction boom is so profound: it dramatically reflects the reality of the suburbs-to-city cultural and demographic shifts taking place across the United States, and the strong appeal of Denver’s urban core in particular.

Let’s take a look at US Census Bureau data of authorized building permits for privately-owned residential units (i.e. no public housing) for the Denver-Aurora-Broomfield Metropolitan Statistical Area, year-to-date, through November 2012 (the most recent month available as of this posting date). I created the table below using metropolitan-level data from here and county-specific data from here. (Note: the Denver-Aurora-Broomfield MSA does not include Boulder County.) 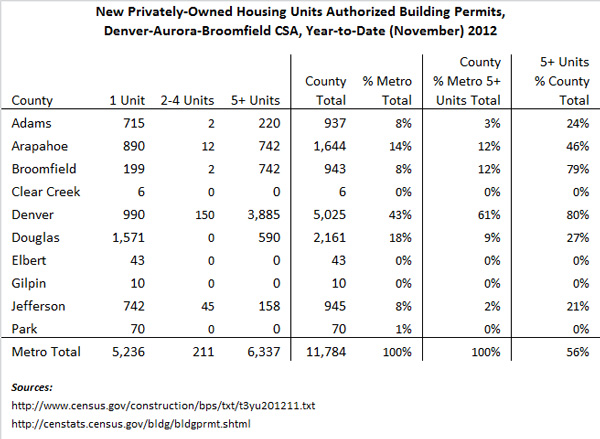 What are the key points we should take from this table?

Twenty years ago, in 1992, Denver County had a total of 506 residential units (of all kinds) authorized, out of a metro total of around 11,000, or about 5% of the metro total. That’s an order of magnitude difference in twenty years. Profound change, indeed.

Downtown-area housing was not the only big news in 2012. Public-sector development continued full-steam ahead. Two big state projects reached completion (the Ralph Carr Colorado Judicial Center and History Colorado Center) as well as two state educational projects on the Auraria Campus were also completed in 2012 (Metro State’s Hotel & Hospitality Learning Center and Metro State’s Student Success Building). The City of Denver finished construction on the Denver Police Crime Lab, as well as the Clyfford Still Museum—a major addition to the city’s cultural scene. The federal government completed a major renovation of the Cesar Chavez Building (plus a new parking garage), and RTD brought construction of the 12-mile long West Line to almost the completion point. Just over three months to go before the West line opens! Major construction also began on the East Line to DIA, the Gold Line to Arvada and Wheat Ridge, and the half-billion-dollar expansion of the terminal at Denver International Airport (with RTD transit center) also started in 2012.

And then there’s that public-sector project that involves the state, the feds, the city, RTD, and the private sector too: Denver Union Station. The project began 2012 with the new light rail station open, half of the underground bus terminal constructed, and a big hole in the ground for the second half of the bus terminal. During 2012, Light Rail Plaza was completed and opened to the public, the reconstruction of 16th Street and Wewatta Street was mostly finished, the second-half of the underground bus terminal was capped and the commuter rail platforms set in place, the 17th Street Garden Plaza was completed (but not yet open) and serious work began on Wynkoop Plaza. One of the most visible aspect of the Union Station project also started taking shape in 2012: the dramatic canopy structure over the commuter rail platforms. Major construction began in 2012 on both the North and South Wing Buildings and Denver Union Station itself closed in late 2012 as it begins its restoration and transformation into a modern/historic transit center with plenty of retail and restaurants and a boutique hotel. Finally, in 2012, I conducted 17 of our DenverInfill walking tours of the Union Station project. Over 500 people attended the tours and we raised over $2,000 in donations for Union Station Advocates and for the students studying in the Master of Urban and Regional Planning program at the University of Colorado Denver. Thank you!! 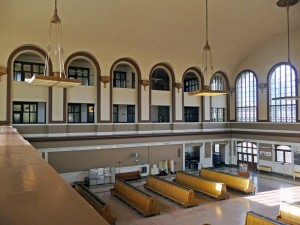 Downtown investment wasn’t limited to residential and public buildings. In 2012 we started to see activity in the office and hotel sectors as well. In addition to the two new “wing” office buildings at Union Station starting construction, the DaVita headquarters opened in 2012, site work started late in the year on 16M (the mixed-use office/residential building at the corner of 16th & Market), and several new office buildings were proposed in the Union Station area. In addition to the new hotel at Union Station, two additional existing buildings (the Colorado National Bank and Xcel Energy buildings) also continued their conversion into new hotels. More good news for the Downtown office market in 2012: the new United States Patent Office will be located in Downtown Denver!

Finally, 2012 was a good year for DenverInfill and DenverUrbanism. Ryan Dravitz gave his camera a serious workout with a steady stream of construction update posts throughout the year, Ryan Mulligan continued his ongoing series of posts about West Line construction and other RTD news, and we launched a new series about East Line construction thanks to our new contributing blogger, Robert Wilson. I completed a 15-part DenverUrbanism series on Denver’s Single-Family Homes by Decade (which darn near took the whole year for me to finish!) and the rest of our DenverInfill and DenverUrbanism blogging crew (Derek, Dan, Shawn, John, and Rick) contributed great content as always. During the year, almost 600,000 people visited the DenverInfill/DenverUrbanism blogs or the original DenverInfill website.

To conclude: 2012 turned out to be a great year for Denver. More and more people are moving into the Downtown area, more investment dollars are flowing into the city center, and Denver citizens remain committed to improving our city. Hopefully, 2013 will be a year where these trends continue.