As is tradition here at DenverInfill, let’s take a look back at the previous year and review what was going on from an infill/urbanism perspective in Denver’s urban core.

Certainly, the past few years have been difficult for infill development, with the economy and financial markets struggling to recover from the recession. However, it appears that 2011 was the year that the local economy really started picking up. In fact, 2011 was a great year for progress in Downtown Denver, and 2012 promises to be downright boom-like.

In 2011, two trends were evident: 1.) Public-sector development and investment has been keeping Downtown Denver a very busy place; 2.) Central Denver is on the cusp of another major residential building boom.

1. In a way, you’d never know the local economy was still recovering from a recession by the amount of construction activity in Downtown Denver in 2011. Thanks to our knack for launching major public works projects just before or during real estate busts, Denver enjoyed a robust year of construction cranes and cone-zones due to public-sector investments in city, state, and federal facilities and infrastructure. In all four directions, Downtown Denver was busy with construction in 2011:

To the South: In Downtown Denver’s Civic Center area, construction on the state’s History Colorado Center and Ralph L. Carr Colorado Judicial Center were in full-swing in 2011. The feds launched the modernization of the Cesar Chavez Building, and the city was busy with tens of millions of dollars of Better Denver Bond investments in Civic Center Park restorations, City & County Building renovations, the new Denver Police Crime Lab building, and a bunch of street/bike/ped projects in and around Civic Center. Add in the Clyfford Still Museum, and the southern end of Downtown was one booming place!

To the East: The Denver Housing Authority continued to work on its Park Avenue redevelopment project in 2011, with the multi-block, multi-year effort nearing completion. Also, Arapahoe Square’s redevelopment is underway with the completion of Solera, the beginning of construction of 2020 Lawrence, and the completion of the Northeast Downtown Neighborhoods Plan. Broadway through Arapahoe Square was completely rebuilt, and East Colfax continued to see new infill projects and momentum towards a future streetcar line.

To the West: The Auraria Campus was undergoing a nice building boom of its own with the concurrent construction of two Metro State projects: the Hotel and Hospitality Learning Center and the Student Success Building. These two projects, along with the Auraria Science Building completed in 2010, are helping to create a more urban edge to Auraria’s boundary with Downtown. Other improvements on the west side of Downtown include the transformative 14th Street project, RTD’s West Corridor light rail construction, and the launch of Denver Housing Authority’s Lincoln Park redevelopment.

To the North: In case you haven’t heard, there’s a lot going on around Denver’s Union Station—about a half-billion-dollar’s worth of goings-on—and that’s not counting the private-sector development that is underway, like the DaVita HQ. A bit further north (or is it west?), Lower Highland continues to sizzle as Downtown’s hottest residential neighborhood. Rick is planning a special Union Station Update to recap that project’s accomplishments in 2011. Stay tuned…

2. We’re on the cusp of a MAJOR housing boom in central Denver, only this time it’s rental and not for-sale residential units that are leading the charge. We’ve reported during 2011 that a number of new residential projects were underway or proposed for the Downtown area, such as Highland Park, Manhattan Phase 2, Prospect on Central, 2020 Lawrence, 19th & Little Raven, 1560 Boulder, 20th & Chestnut, 17th & Chestnut, and 19th & Logan. These are all great projects and evidence of economic recovery and the continued confidence in our urban core.

Here’s the thing: this is just the beginning. In the past few months, for every project I’ve reported on DenverInfill, there are about three to four projects that I haven’t reported. I haven’t mentioned them because they represent projects that are only rumored or otherwise unsubstantiated, or projects that have been revealed to me in confidence. Nevertheless, I have on my project-tracking list about 20 multi-family rental projects within a mile-or-so radius of Downtown that haven’t been reported on this blog. As is always the case with real estate development, a few will happen, many will not. But even if only half of these unannounced projects make it out of the ground in 2012, Downtown Denver will have several thousand housing units under construction in 2012. Is that too much? Well, the rental vacancy rate is as low as it’s been in a decade, and urban core areas continue to have strong appeal throughout the nation, so we’ll see. Nevertheless, I suggest you get ready for a very busy 2012 for central Denver infill development. I’ll wait until our 2012 Retrospective to say that the “Boom is Back,” but this is a heads-up that it may be.

We live in a fantastic city, with an urban core that features an amazing mix of 19th Century homes and storefronts, 20th Century buildings of every imaginable shape, size, and style, and a significant infusion of new 21st Century developments that are filling the gaps in our urban fabric that resulted from tragic decisions that nearly destroyed our downtown area in an effort to make life as easy as possible for people driving cars. As we shed that automobile-centric perspective and shift toward emphasizing pedestrians, bicycles, and transit, Downtown will only get better. We saw that transformation advance in 2011 and it will continue to gain steam in 2012. 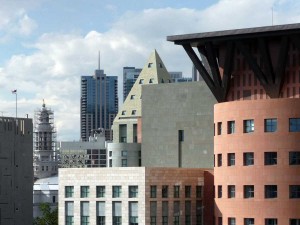